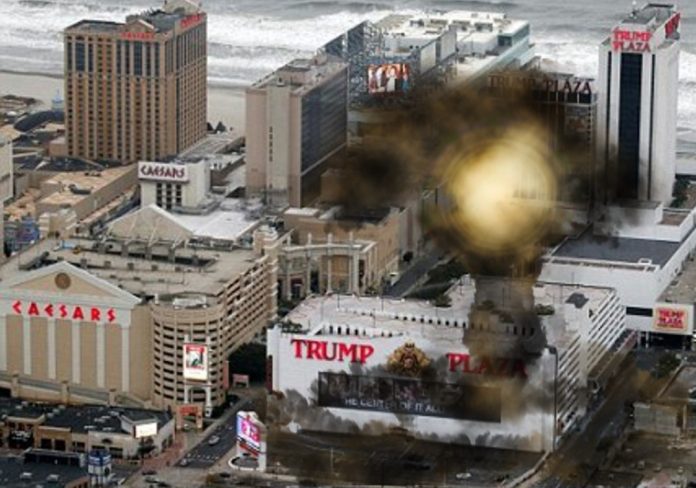 The highest bidder in an Atlantic City auction will win the chance to push the button to implode Trump Plaza, which has sat abandoned and crumbling for decades.

Fundraiser with a Bang

Casinos have always been a decadent source of play where almost anything goes. In Vegas, there’s many extravagant things to do for the right price. For $250,000, you can turn on the fountains of Bellagio, pick the music, and chug some fancy bubbly in your VIP suite.

But Atlantic City has decided to up the ante with an auction to blow up the dilapidated Trump Plaza casino. A crumbling eyesore since 2014, demolition work has already begun. But the final bang that brings down the structure will be initiated by the lucky winner of the AC auction.

Atlantic City Mayor Marty Small has been trying to remove the Trump Plaza for years, but current owner Carl Icahn doesn’t want to pony up the cost of destroying the dump. As chunks of the building’s façade fall off and pose a public danger, the mayor is eager to relegate the Trump monstrosity to the dustbins of history.

So, the mayor decided to hold an auction for the honor of pressing the button which blows up Trump Plaza. The highest bidder will press the button to dynamite the structure on January 29.

“Some of Atlantic City’s iconic moments happened there, but on his way out, Donald Trump openly mocked Atlantic City, saying he made a lot of money and then got out,” said Mayor Small. “I wanted to use the demolition of this place to raise money for charity.”

The mayor expects the winning bid to be over $1 million, and the proceeds from the auction will benefit the Boys & Girls Club of Atlantic City. The group has already hired a professional auction company to start the bidding, which ends January 19. The top bidders will join a live auction which will determine the final winner.

Former slumlord and casino developer Donald Trump made fortunes off buying properties with junk bonds, running them into the ground, and bailing on trails of debts. The former Trump Taj Mahal was bought and renovated by Hard Rock, but Trump Plaza slowly crumbled away over the decades.

Billionaire investor Carl Icahn bought the building in 2016 when it fell into bankruptcy proceedings but has yet to do anything with the property. He has also not declared what he will do with the land after the Trump Plaza is destroyed.

Imploding casinos is commonplace in Las Vegas, where almost every casino in town has been blown up and rebuilt several times over the city’s history. In Atlantic City, the last casino implosion was in 2007, when the former Sands casino was blown up to make way for a new casino project. Unfortunately, that project was never realized.

The timing of the auction couldn’t be better, as Trump still battles to squat the White House until the last possible moment. And right about the time Trump is being dragged kicking and screaming from the Oval Office, the last casino building bearing his name will go out with a gigantic bang.