Chinese police recently arrested 15 suspects for their involvement in running an illegal online gambling operation funded with cryptocurrency. Police seized over $3.8 billion worth of EOS cryptocurrency in the raid.

Gambling is illegal in Mainland China except for its state-run lottery. All other forms of gambling are strictly prohibited. Following a series of raids on foreign-run gambling operations, China is stepping up its game by cracking down on operations which lure Chinese citizens abroad for gambling purposes. 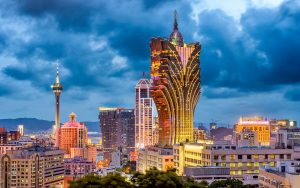 China does not consider trips to the SAR enclave of Macau as illegal gambling. However, China has condemned several VIP junket tour operators for alleged money laundering and organized crime ties.

According to cryptocurrency news site The Block, this was the first time that smart contracts were used in China for illegal online gaming.

By analyzing 27 million gaming transactions since last October, authorities traced the gambling operation to the town of Yancheng, in the northeastern province of Jiangsu.

“This is a crime with a high intelligence quotient. No matter how complicated the case is, our police will make every effort to chase, intercept, and detect it quickly,” Gang said.

As smart as the cybercrime gets, China is often one step ahead of it by using big data to track its citizens. The state has already used big data to crack down on citizens caught leaving China on gambling excursions.

China’s beef with gambling goes back many years, and the current raids are nothing new. However, to keep one step ahead of Big Brother, illegal gambling operators have started using cryptocurrency to fund their operations.

Unfortunately, when Chinese Big Brother watches your every move and uses big data to track your transactions, even cryptocurrency transactions are not as anonymous as you might think.