A poker player lost a $13,000 pot last month after showing his opponent his hole card during a live hand. Although the player lost a huge hand at the California casino, he managed to be a good sport about it. This is not always easy to do when a player’s losses are in the five figures just on a single hand.

California is home to 62 casinos and they are spread all over the state. While Native American tribes own some of the casinos, there are companies that own the others. Unlike many other states with casinos, California allows casinos to cater specifically to a particular game.

The Bicycle Casino in Los Angeles is one of those specialty casinos in the state, where the only game played is poker. 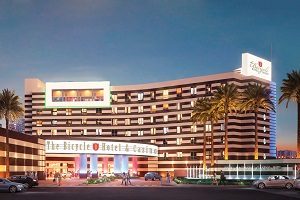 The Bicycle Casino has an interesting history. The man who founded it loved to play poker and wanted to run a casino where people only played poker. However, many people, as well as the government, wondered where the founder got his money. The rumor was that he paid for the construction of the facility, in part, through drug money he laundered.

In 1987, the man who helped the owner finance the casino was indicted for money laundering. He apparently needed a source to launder millions of dollars he received through his marijuana smuggling operation. This is amusing since medicinal and recreational marijuana use is now legal in California. The original financier died before there were any charges brought against him. Continuous issues with money laundering led to the federal government owning the casino for a while. The government made millions of dollars of profit before it sold the casino to a new owner in 2017. The Bicycle has many different types of poker, including Texas Hold’em, Seven Card Stud, Omaha Hold’em, Mexican Poker, Pai Gow Poker, and Three Card Poker.

The Bicycle has hosted the Legends of Poker, which is a tournament on the World Poker Tour. In addition, the casino has hosted Live at the Bike since 2006 (consistently since 2011). This is an event in which poker players play poker live in front of viewers to the channel.

On a Monday night at the end of last month, there was a live event at the Bicycle Casino. The players played a no-limit Texas Hold’em game. It had an ultra-deep-stacked limit. Part of the reason the pot got so big was because of the Mississippi Straddle. This allowed players to make steep secret bets.

The video of the poker hand began with a hand of one particular player, named Hicks. He had an ace of diamonds, five of diamonds, two of clubs, king of diamonds, and four of spades. As the player contemplated his hand, his opponent, known as “Bitcoin Yoda,” offered to show him his hole card. As poker players know, showing the hole card is an extremely risky move that jeopardizes the hand of the player. But, they are not always disqualified.

Hicks, whose turn it was, is a proven winner and a regular on the World Series of Poker tour. He saw the hole card and knew that he could be facing a straight. However, he didn’t think Bitcoin Yoda had a strong hand, so he upped his bet to make the pot $25,000. Bitcoin Yoda called, but, as it turns out, he didn’t have anything. He bluffed and Hicks won a $13,000 payday on one hand.

Bitcoin Yoda was a good sport about the loss, however. He told Hicks he had a good hand.