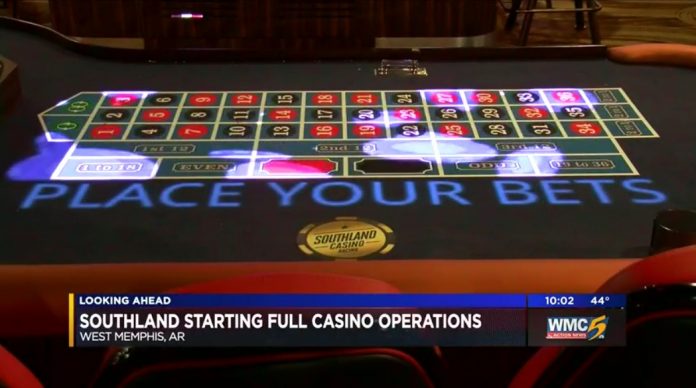 A West Memphis, Arkansas, greyhound racetrack got a new name and a new game early Monday morning. Formerly known as Southland Gaming & Racing, the facility reopened as Southland Casino Racing at 4 a.m. Monday morning. Large groups of early-bird gamblers flocked to the first craps tables to open at Southland, marking the dawn of a new day for legalized live gaming in Arkansas.

A First for Live Casino Gambling in Arkansas

Customers arrived as early as 2 a.m. in the morning on Monday, April 1, to be the first to shoot craps at the new tables at Southland Casino Racing. The newly-opened casino area of the property is open 24/7, your round, but only recently started drawing Friday or Saturday night business on a Monday, according to David Wolf, president and general manager of Southland.

As the casino opened a second craps table, avid gamblers flocked to the new table as well. By 1 p.m., the crowded casino was in full swing. In addition to the new craps tables, roulette, blackjack, and poker tables also opened for gaming business. The entire gaming floor also contains 2,000 slot machines.

The slot machines have been in operation since 2006, when Arkansas legalized electronic gaming. However, it wasn’t until November of last year that full-scale live gambling became legal in Arkansas. The statewide referendum passed by voters will allow 3 new casinos to operate in Arkansas. The sudden expansion comes after the Arkansas Racing Commission approved a casino license for Southland on Saturday.

“We got these new roulette tables, they’re called blaze tables, nothing like it in the Mid-South. They light up, they’re a lot of fun.”

The new Arkansas gaming license law marks a major change for Southland, which has been operating primarily as a greyhound racetrack since 1956. Southland’s parent company, Delaware North Corp., announced plans for a $250-million expansion to the property. The new casino-resort will house a 300-room, 20-story hotel, with 100,000 square feet of new gaming space for 2,500 new slot machines and 60 table games. The new property will also host 5 restaurants, 3 bars, and a sports bar.

It will take about 18 months for the dog track to morph into a fully-fledged casino resort, but Southland plans to offer around 40 gaming tables in the meantime. 18 gaming tables were in operation Monday afternoon, including the popular craps tables.

The change in Arkansas law also allowed Southland to say “slots” in all advertising. Previously, they had to refer to their gambling activities as “gaming.” Groundbreaking for the new casino expansion properties is set to begin in late April or early May. Greyhound racing will continue as always, unaffected by the expansion.

A Regional Increase in Employment

Southland Casino Racing is located in West Memphis, Arkansas, a short distance from Memphis, Tennessee, and the state of Mississippi. Southland’s proximity to 3 states is expected to result in a boom in employment in the region.

According to David Wolf, Southland hired around 100 people to run the newly-expanded gaming floor. The new staff were mostly dealers and supervisors, who brought the total Southland workforce close to 900. With the expansion of the casino and hotel, Wolf expects the total staff number to reach 1,200.

Southland sent out an advertisement for new employees across the tristate area, from Memphis to Tunica, and across the Mississippi Gulf Coast. Tunica County, Mississippi, is home to its own gambling industry, and many experienced casino employees are willing to relocate to West Memphis.

The huge response to the casino jobs advertisement was unexpected, but welcomed warmly by Southland staff. So many job seekers expressed interest in working for the new casino that there is now a waiting list for applications.