In the upcoming 2019/2020 English Premier League (EPL) season, half of the teams will have their shirts sponsored by a gambling company. EPL clubs are set to earn £349 million ($436 million) from their shirt sponsorship deals in the next season. This is a 10% increase from what the teams earned in the previous season. 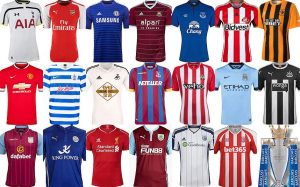 EPL is undoubtedly one of the most popular soccer leagues in the world. It is favorites with companies wishing to have wider exposure in international market segments. Gambling companies are some of the entities that have recognized the popularity and importance of English soccer teams in the international arena. There are shirts sponsorship gambling companies that are based outside the UK as well.

Shirt sponsorship deals are even more pronounced in the next tier down in English soccer known as the Championship where out of 24 clubs in the league, gambling companies are sponsoring shirt kits for 17 teams.

Backlash against Sponsorship by Gambling Companies

UK politicians and gambling awareness groups have raised concerns about the growing gambling advertisements in the UK. Soccer, in particular, has different forms in which gambling companies can use to advertise their brands from televised ads to pitch billboards and shirt sponsorships. The movement by those against increasing gambling campaigns is due to the great number of younger staunch soccer fans watching sporting events.

Ladbrokes owner, GVC holdings is on the forefront in the campaigns to end soccer shirt sponsorship and broadcasting of gambling ads.

Tom Watson, Deputy Leader of the Labour Party has also pledged to push for action against football shirt sponsorship by the gambling industry.

Watson said, “Less than a year ago, we were told by the gambling industry that they are committed to reducing the amount of advertising in football.”

The gambling industry had promised to provide a safer environment for gambling, but Mr. Watson and other campaigners think UK people have not been short-changed.

“The time for warm words is over. Either the industry is going to act in good faith, or we will need stricter regulation of gambling advertising – starting with a ban on football shirt sponsorship.” Tom Watson added.

Paddy Power Betfair has also joined Ladbrokes-owner GVC holdings in breaking ranks with the industry and calling for action against shirt sponsorship deals with gambling companies.

However, for Paddy Power campaigns, it is a little different though, and they are not calling for the total ban, but the removal of gambling companies’ logos in the shirt sponsorship deals. The campaign is dubbed-the save Our Shirt Campaign.

With English soccer leagues’ huge following, any company has a great chance of boosting its influence if they sign a shirt sponsorship deal with any team in the EPL.