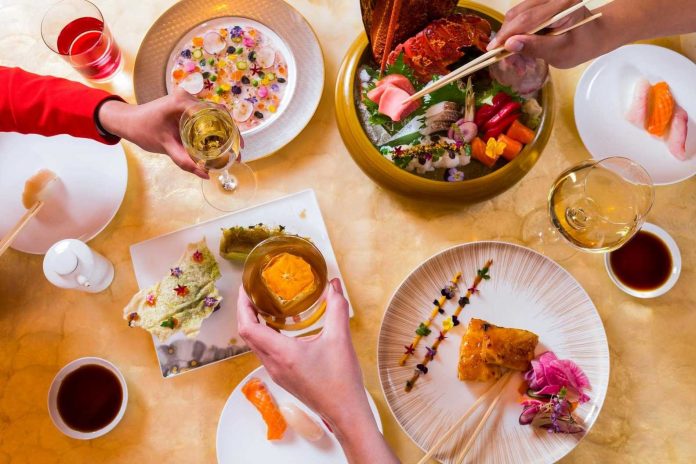 In the early days of Las Vegas, visitors flocked to casino resorts which offered sumptuous buffets, steak dinners, and the infamous shrimp cocktails. But as the Las Vegas culinary scene expanded to include celebrity chefs and Michelin-starred restaurants, they did not forget the vegans.

No need to be a lost vegan in Las Vegas; there are plenty of delicious, nutritious, and animal-free dining options available. Forget the vegan stereotype of salads and shredded carrots. Vegas vegan offers more than just a tofu salad with kale leaves on top. The following best vegan eateries in Las Vegas take the plant-based diet to a whole new level.

English doesn’t have accent marks to denote pronunciation. Whether it’s pronounced ‘veegan’ or Vegan, it’s spelled the same. To an outsider, Las Vegans might be a Mexican mariachi band who doesn’t eat meet. Actually, Las Vegans are natives of the city of Las Vegas. We know, it’s confusing. We really think Vegas natives should be called Sin Citizens. And are working hard to make it so.

In the meantime, we offer up a tasty plate of some of the best vegan food you can find in Las Vegas. The range of vegan options is extensive and astounding. Some of the vegan food Vegas offers is delicious enough to make a meat-eater want to switch.

Some of the following eateries offer vegetarian and vegan options, for those who don’t mind some dairy in their diet. But they all have one thing in common: fresh, delicious, nutritious vegan food.

One of the best parts of being a foodie is the wide variety of delectable delicacies available from every corner of the earth. Whether you’re a fan of Indian, Mexican, Italian, or Asian cuisine – or American classics – Las Vegas has got the vegan versions. Savor the sumptuous vegan offerings from the following Vegas eateries.

Sample Italian favorites like eggplant parmesan, stuffed portabella mushrooms, and vegan pizza. They also make a mean meatball sub from a plant-based meat substitute. Or dive into the pasta bar lunch special for $11.11 Tuesday through Friday.

With all the savory sauces and garlicky grub, Tarantino’s is a tasty treat for vegans and meat-eaters alike. Head south of the Vegas Strip to 7960 S Rainbow Blvd to try out Tarantino’s tasty treats.

Another international favorite in the U.S. is Mexican food, and Veganos Kitchen offers a 100% plant-based variety of traditional Mexican favorites as well as American classics like burgers and sandwiches. 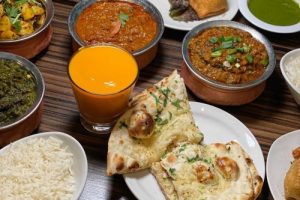 If you crave rich, spicy Indian food without the meat, Mint Indian Bistro is there to serve. Mint has two Las Vegas locations, with one restaurant on 730 E Flamingo Rd, right off the Vegas Strip.

In the grand style of classic Indian restaurants, Mint offers a lunch buffet during the daytime and an upscale dining experience at night. Choose from a wide variety of North and South Indian dishes including curries, appetizers, rice, and veggie delicacies.

The menu and the lunch buffet items are all clearly labeled as vegan, vegetarian, gluten-free, and non-vegetarian. 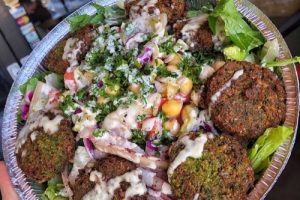 For fans of the exotic flavors and health benefits of a Mediterranean diet, Parsley modern Mediterranean fits the bill. With veggie classics like hummus, falafel, stuffed grape leaves, and red quinoa, Parsley really delivers the goods.

Parsley has three locations in Vegas, so you’re never very far from a tasty Mediterranean dining experience. Parsley is the place to take your non-vegan friends, as they cater to all walks of culinary life.

The Best of the Rest

Sometimes you just want the rich, satisfying, and slightly decadent comfort food America is famous for. So, check out the following vegan and vegetarian restaurants, diners, cafes, and bistros for the best of the rest.

Located near the UNLV campus, The Modern Vegan offers the best American comfort food you can find in Las Vegas – in vegan form. This strictly vegan restaurant uses meat substitutes and fresh veggies to whip up culinary magic that entices vegans and non-vegans alike.

You can also get your breakfast game on with chicken & waffles, a breakfast burrito, or the What Happens in Vegas plate. What happens is a tofu scramble, bacon, sausage, potatoes, and asparagus. All Modern Vegan menu items are 100% plant based.

Violette’s checks all the foodie boxes when it comes to offering fresh, organic, vegan offerings. This café is run by poker pro Cyndy Violette, who happens to love healthy food and juices.

Enjoy delicious sandwiches, classic comfort food, and healthy bowls of food in a café with a groovy vibe. Eat breakfast, brunch, lunch, or dinner at Violette’s. Violette’s is also kid-friendly, with a kid’s area located inside. 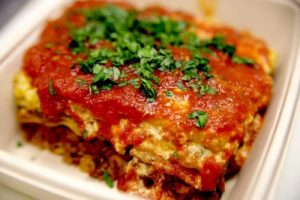 Take a trip to the hip Downtown Las Vegas Container Park to visit Simply Pure. Located on historic Fremont Street, those who opt for the Fremont Street Experience over the Vegas Strip should visit the container park.

The open-air shopping center offers a wide variety of specialty foods, and Simply Pure is the vegan option. One of their specialties is the lasagna, which looks and tastes exactly like traditional lasagna but with a kick: it’s entirely vegan.

Simply Pure also offers tacos, nachos, grilled cheese, pasta, wraps, and kale chips to die for. Simply Pure got a punch in the popularity when visited by Bill Clinton in 2016. And here we thought Clinton was more of a bucket-of-chicken kind of guy.

We hope you get a chance to savor the flavor of the best vegan and vegetarian food in Las Vegas. Most of these fine eateries offer delivery options as well, especially during the current situation.

It’s great to know that word of the vegan lifestyle is gaining so much traction – even in a place like Sin City. So, Sin Citizens and visitors alike can marvel at the meatless diet in all its myriad forms. It’s enough to make you plan your Vegas trip and cry out ‘Vegans, Baby!’