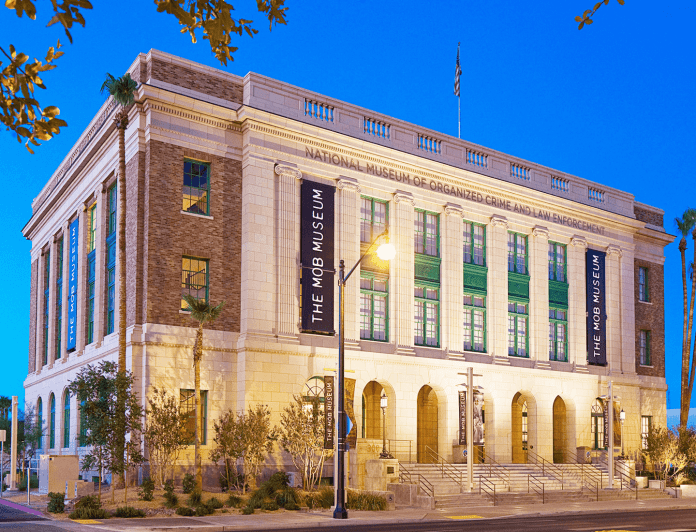 The Mob Museum in Las Vegas is presenting a spotlight on legalized gambling on March 11 and 25 at 7 pm. The two-part event will feature speakers highlighting the 90-year history of gambling in Nevada.

According to the Mob Museum website, the March 11 event is titled “Wide Open Part 1: 90 Years of Legal Gambling in Nevada: Becoming American’s Playground, 1931-1960.” This session will “chart the gambling industry’s rise from legalization in 1931 through the Mob-controlled golden age of the 1950s.”

Part 1 in the series highlights the “turbulent and Mob-infused history of Nevada’s dominant industry,” from its humble beginnings in Downtown Las Vegas to the development of the Las Vegas Strip.

Legal gambling in Las Vegas began in 1931 and was concentrated downtown. Between 1941 and 1958, the desert highway leading south to Los Angeles became populated with 13 resort hotels. This area became what is now the Las Vegas Strip.

In 1946, mob gangster Benjamin “Bugsy” Siegel opened the Flamingo and ushered in the Mob-controlled casino era of the 1950s, featured in the Martin Scorsese film Casino.

Legendary entertainers like the Rat Pack (Frank Sinatra, Dean Martin, and Sammy Davis Jr.) crooned in the glitzy caverns built by these brazen entrepreneurs and dangerous mobsters. Bugsy Siegel started the Vegas entertainment tradition when he personally flew in big-name artists to perform at the Flamingo to draw visitors.

Bugsy built it, and they came. The droves of visitors continued to put Las Vegas on the map, pulling even more legendary performers like Liberace, Elvis, and more.

In-person tickets to both parts of Wide Open have sold out, but you can watch both events for free in a special live stream offered on the Mob Museum website.