Upon the initial impression, pachinko machines seem very intimidating with over-the-top blinking lights designed for the sole purpose of blinding you. Though the game seems intimidating, pachinko is fun and engaging once you get the hang of it. If you are looking to learn how to play this amazingly simple and enjoyable game, stick around for pointers that will get you started.

Pachinko is a very popular game in Japan with an estimated 30 million people engaging in the game annually. Based on these numbers, it has become the most dominant pastime activity in Japan. The Pachinko industry in Japan is twice the size of the auto production industry, accounting for over 4 percent of the nation’s gross domestic product (GDP). 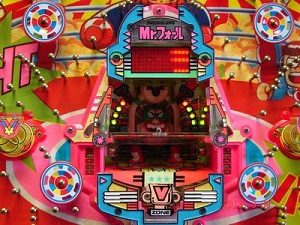 Pachinko is a Japanese game played in machines that often go by the same name; pachinko. The pachinko machine features a vertical playing field that is surrounded by a glass enclosure. The playing fields usually have 200 brass pins and use a multitude of tiny balls that sometimes number in the thousands.

Older versions of pachinko machines were strictly mechanical but the modern machines are fully electrical. They resemble arcade games, from how you fire the balls into the machines to the video screens and the jackpots.

How Is Pachinko Played?

For you to play the game, you are first required to rent out the balls for the game from the establishment. These balls not only allow you to keep score of your game, they also represent your winnings at the end of the game. You rent game balls by handing the attendant at the counter your currency. In exchange, you will receive a tray containing the balls, which usually carries 250 balls.

The speed with which the balls drop into the playfield largely depends with how many times you twist the knob. By twisting the knob, you can change the path the ball takes as it bounced down the pins. The idea is to find the best spot where once the balls hit they directly bounce off into the small hole at the bottom of the playfield. Finding the perfect angle of the pins sends them right into the winning hole. From there, you can use a coin to freeze the mechanism of the machine and watch the balls pile up in your tray. Now, of course, this will get you ugly stares from the attendants; ignore them and continue your gameplay.

With every ball that gets into the winning hole, you win ten more extra balls, and a free spin on the virtual screen of the pachinko machine. When you get three matching symbols on the virtual slot machine, it’s a win for you.

This is where the game gets exciting and addictive. A reach is when the machine matches two symbols on the virtual screen and you are anticipating the reveal of the third symbol. At this point, the machine goes into ‘REACH’ mode with a cartoon figure of a nice guy representing the third symbol.

The reach is usually on the fourth spin and you will probably lose, meaning the third symbol will not match the other two. However, you will know when you are about to win on the spin because of the fanfare that erupts on screen. The blue bus that has been crossing the screen will turn red and the lights on the machine will start spinning. The virtual woman on the screen will suddenly be clad in gold while the machine shows it is in REACH mode. These and other cues will let you know you might have hit the jackpot.

Once the symbols match up, the small flap at the bottom of the playfield flies open. This allows every other ball on the playfield to go into the winning hole, and each ball that goes into the hole earns you ten more balls. So, by the time this is done, you will have tray loads of balls in winnings.

With each game you win, your reward balls will be let loose on to the tray. You may either continue playing, in which case you would fire them back into the playfield, or collect the balls and redeem your prize. The machines award more balls than you initially put in so it’s normal to accumulate multiple trays of steel balls during play.

Once you are done with your play, you can call on any of the parlor attendants to help you tally your winnings. Attendants are usually clad in bright reflecting jackets, so they are quite hard to miss. The attendant will help you to the jet counter where your winnings are tallied.

At this point, it is important that you adhere to the following rules:

Rule one – Have your game face on when playing this game. This means you should resist the temptation of openly acting on your emotions, whether you win or lose. Be mindful of those around you who are also going through the motions.

Rule two – Do not attempt collecting your tray full of winnings by yourself. There is a small button on the machines that signal the attendants, who will help you place your winnings on the floor next to you.

Rule three – This is probably also the most important rule. Avoid knocking over the trays while navigating the small squeezed spaces of the pachinko parlors.

Depending on the parlor, you’ll either find jet counters that you operate by yourself or attendants to assist you through the process. Jet counters are machines that count all the balls that you have and will give out a slip to that effect. With this slip, you can then redeem your winnings for an eclectic variety of prizes such as books, stationery, cigarettes, snacks , etc.

You cannot redeem your winnings for money at the parlor, but there are places in the vicinity of the parlor where you can. This is not altogether legal but is a common practice that has been used to bypass the nation’s gambling laws. Although the exchange of prizes for money is a tolerated practice, gamers are not allowed to inquire on where the exchange place is openly.