The Economic Realities of Monopolies

In the history of the United States, there has always been a business cycle between monopolies and small businesses. Small businesses are the innovators of society, and they employ more people than larger companies. However, corporations represent stability and continuity. Think about it. Large businesses are in the news all the time. In the television and telecommunications industries, the music industry, grocery stores, pharmacies, and Internet companies, the big companies are in charge. All the “bigness” in the industry actually hurts workers and customers, according to economists, because they choke off the competition and don’t allow workers to see a rise in wages.

This has been especially true in the beer industry, which has seen nothing but monopolies until the last five years. In fact, two companies, Anheuser-Busch InBev and MillerCoors, have had a monopoly on the beer industry for more than 100 years. As late as 2012, the two industry giants had a 90 percent share of the beer business.

The Rise in Craft Breweries

There has been an interesting development in the last five years, though. Craft breweries have been around in the United States for more than 200 years. In the past, they provided no competition for the large beer companies. But, somehow, they have managed to gradually increase their shares in the beer market.

Perhaps the largest reason craft beer has been successful is that the tastes of consumers have changed, and the large beer companies did not notice it. Consumers want more varieties of beer, with fuller flavors, and they want to support their local economies. They view big business as anti-innovation and a killer for local small businesses.

While some of the rise in small craft breweries can be attributed to the taste for rare beverages, such as expensive coffees and liquors, craft breweries have also managed to cater to the tastes of people who were ignored by the large breweries. The beer monopolies have spent a considerable amount of time telling people what they wanted to make and generalizing the market because it was cheaper for a lot of people to drink the same beer.

The Role of the Great Recession

The Great Recession contributed to the rise in craft breweries because of a large number of Millennials and Gen Xers who lost their jobs. These people decided to turn their hobby of home brewing beers they liked into a business out of necessity. These breweries began brewing in small batches and having tasting parties. Some of the breweries never got off the ground, but others found a niche market and became successful They continued to brew in small batches, opened little breweries, and added locally grown food to their offerings. Local breweries also catered to regional tastes, such as the craft breweries in the South that added nuts, honey, and fruit flavorings to their beers. While people in the Midwest might hate the beer, Southerners might love it. Because the breweries are smaller, their overhead is smaller, too, and, gradually, they began to hire more and more employees. By the time the Great Recession ended, many former big company employees decided to stay self-employed.

The Decline in Traditional Beer

The triumph of the craft beer industry has meant that the monopolies have declined. Economic figures have reported that, between 2008 and 2016, the number of small breweries grew by six times, and brewery workers who worked in small companies rose by more than 120 percent.

The Trend in Small Batch Breweries

Not only has the trend toward small batch breweries been a success, but small batch wines and liquors have also benefitted from using the same formula as local breweries. Economists have estimated that there has been a 70 percent increase in wine and liquor small businesses in the last 10 years. These other small batch liquor businesses have taken advantage of the falling costs of equipment, the availability of small business rental space, and the inexpensiveness of advertising on social and local media.

There are lessons for the large companies to learn if they are willing to listen. First, large companies should follow the lead of the small breweries. They need to find ways to be innovative, not only with their products but with employees and benefits, as well as advertising. Second, large companies have to listen to their customers and do customer research. For example, the large monopolies in the beer industry probably could have seen the trend moving toward fruity, flavorful Indian hops beers had they been paying attention. Third, the monopolies should have pushed for greater deregulation because the overregulation of the industry means businesses have to pay more for regulations that small companies do not have to pay because of their size. While larger companies can produce more beer and pay higher wages and benefits, they also have to pay money for retirement packages, benefits, and unemployment benefits.

The Bright Spot for Big Beer 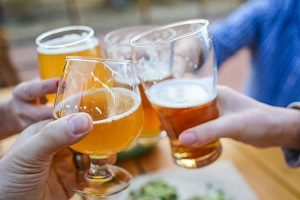 If big beer companies have a chance to recoup some of their losses, economists say that they need to diversify. Some of the monopoly beer companies have begun to do just that. AB InBev has been buying up beer reviewing websites and delivery operations in order to expand its reach. AB InBev has bought a share of the beer reviewing site in Rate Beer. Other breweries have bought stakes in beer review websites, such as October, the Beer Necessities, and Beer Watch, hoping that the websites would talk up the fabulous beer they have to offer.

In addition to the beer monopolies buying up reviewing websites, they have also been buying distribution and online retailers, such as Beer Hawk in Great Britain, which ships beer all over Europe. Monopolies have also bought shares in Google, Facebook, and Twitter in order to promote their beers. Large companies, such as Amazon, which just bought Whole Foods, also have money invested in large breweries, so that they can offer their products to as many people as possible.

While the beer monopolies are battling for every dollar, they are going to have to learn to live with the rise in small breweries and learn from them. While small breweries are annoying to the big boys, they are also a way for large breweries to learn the tricks to stay relevant. If the monopolies are able to capitalize on the lessons learned from the small batch breweries, they might be able to survive the rise of the smaller competitors.