Home » USA Online Casino Blog » Men vs. Women – Who Is the Better Gambler?

Since the beginning of time, there has been a battle between men and women over which gender is better at certain things. Men are said to be better at speed, but women are better at distance. Men are said to be stronger than women, but women stay stronger for a longer period of time. Women will ask for directions, but men are more likely to be able to navigate. So, where do men and women stand in terms of gambling? Read below to discover which gender is the better gamer.

Research has indicated that men participate in gambling activities at far higher rates than women. Men are especially interested in skill-based gambling, which would include baccarat, poker, blackjack, and craps. Men play poker at a rate that was three times higher than that of women gamers. Women are more likely to play video poker, slots, scratch-off tickets, lotteries, bingo, raffles, and sweepstakes.

In addition, men overwhelmingly enjoy online gaming. Research has shown that of the people who gamble online, 82 percent are men and only 18 percent are women. While men spend 14 months of their lives gaming, females gamble a lot, spending more than 21 months gaming.

Men spend more money on gaming than women do by more than $1,000 per year, according to some research. Men spend an average of close to $4,000 per year on gambling activities, while women spend around $3,000. However, that figure increases among problem gamers. Men who have a problem with gaming spend more than $25,000 a year on gambling, and women who have a problem with gambling spend a little less, around $24,500, which is an enormous amount of money.

Types of Gaming Online—What are the Differences between Men and Women? 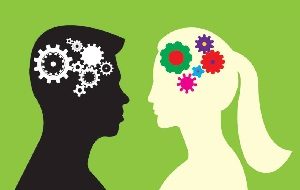 They were also asked how they would react if they won a jackpot larger than $750. The men appeared to want to continue to gamble the winnings, but three-quarters of the women said they would cash out immediately. The study showed that the younger the participants were, the more likely they were to continue to gamble, whether or not they won a large pot. Participants over the age of 55 were the most cautious.

With regard to loyalty, the researchers found that women tended to stick to one or two websites, moving from one to the other depending on the prizes and free spins offered. Men, on the other hand, shopped around several different websites because they were looking for the best way to win free money and rewards. Interestingly, less than 10 percent of both men and women gamble at six sites or more.

Men are more than twice as likely to have a problem with gambling than women. Studies have shown that while the problem gambling rate is about 1.3 percent for men, women who are problem gamblers make up 0.6 percent of the population that gambles. The one exception to this figure is with women and video poker machines. Women who play video poker, called pokies in some countries, have a much bigger gambling problem than men do.

Men tend to populate more high-risk groups with respect to gaming, while women are less likely to be a member of a high-risk group. High-risk groups for gaming include people aged 18 to 24, minorities, people who speak a language other than English in English-speaking countries (where the majority of the studies are done), and people with a history of addiction or substance abuse issues.

So, Who Is a Better Gambler?

A Harvard research study gave a group of 30 men and 30 women a bankroll of $200 each and told them to gamble. They were told to play their game of choice to see if they could bring back money to the study. After a week of gaming, the researchers found that women earned 15 percent more than men with their money. The study revealed several gambling traits women have. While women take fewer risks than men, women tend to play more aggressively than men and show signs of ruthlessness when playing. This is in direct contrast to the image of women as caregivers and nurturers. The research showed that when women are gambling, they are as competitive as men, and don’t allow personal relationships to define their gameplay.

The research also stated women begin to gamble at an earlier age than men, at around 29 years old. Research has shown that women visit casinos, either on-site or online, because they enjoy the release they can get from gaming, especially after they have had children. Men usually begin to gamble at an average age of 33, which is when they begin to see increases in salary that allow them discretionary income.

Gambling, whether on-site or online, is a form of entertainment that is played by more than a billion people all over the world. While many people assume that men were the only people who were gaming in the early days, in reality, women were some of the earliest gamblers at salons in Europe in the 17th century. Men, however, were almost exclusively gamers in the United States because gaming took place in saloons, usually in the Wild West, and “decent women” were not allowed in saloons. While there has been gaming in Europe, Australia, and the United States for decades, women did not begin gambling in earnest until the last few decades when they began to enter the workforce, and began to use their own money to gamble.

The argument for ages has been that men are better gamblers. This was assumed because men are supposedly better at games of strategy. It was thought that men could also control their emotions, and not give their intentions away, especially in games of skill. However, increasingly, women have been seen to be the equal of men in games of skill and can process skill games as logically as men. So, there you have it. It turns out women are better gamers than men, at least according to some studies.