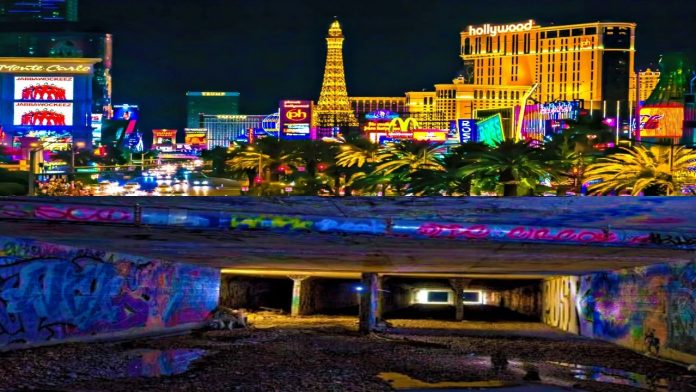 Sin City is known for every kind of vice. It’s the kind of place where things happen that need to stay in Vegas. Usually, what stays in Vegas is your cash, but there is another dark secret lurking in the bowels of Las Vegas: the mysterious tunnel people living under the Las Vegas Strip.

In a series of flood tunnels twisting and winding 200 miles under the streets of Las Vegas, 1,000 ‘mole people’ live underground in the damp and dark environment, out of the limelight.

Some might even say that it’s a real sin.

Literally Down and Out

Most of the subterranean Sin Citizens tell tragic tales of how they were reduced to living in the Vegas tunnels. Some are war veterans with PTSD, others lost their homes in the sub-prime mortgage crisis, and some of them became addicted to soul-stealing drugs.

The tunnels are full of rats, poisonous spiders, brackish streams of water flowing underfoot, and (supposedly) even a dangerous character nicknamed The Troll, who roams the tunnels brandishing an iron bar. But the tunnel people are dug in, and many of them have been there for years.

A city of such wealth has its fair share of material waste, and many of the tunnel people have set up ‘cozy’ little bungalows crafted out of discarded furniture and plastic crates. 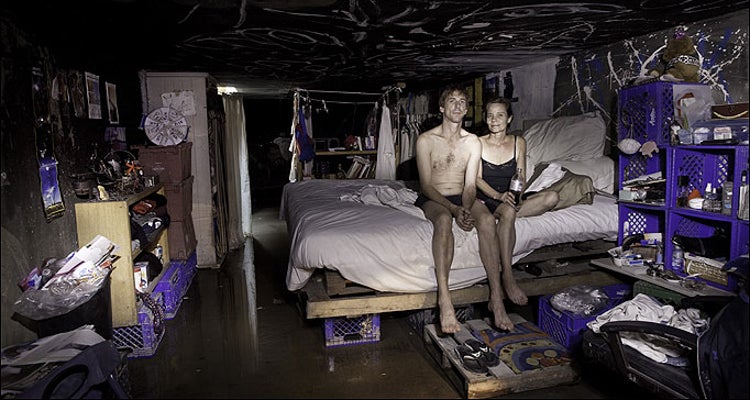 In an eerie scene straight out of the Metro 2033 books, the tunnels look like the last refuge of a post-apocalyptic society. It’s an unsettling atmosphere of darkness and gloom, with dirty rattan rocking chairs perched on splintered wooden pallets, rotten mattresses, and pairs of shoes sitting on concrete blocks surrounded by muddy water. Multiply that by 1,000 and you get an idea of the scale of the subterranean society.

The original Rat Pack were the crooning cool cats who lent their legendary style and swagger to Las Vegas – which ultimately defined the city. But Frankie, Sammy, and Deano would be spinning in their graves if they knew about the new rat pack living underground. 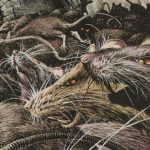 While the underground denizens have been dubbed ‘mole people’ by the media, the very real threat of sewer rats is ever-present. Disease-bearing rats are kept at bay by campfires, while an even bigger threat looms on the horizon: flash floods filling the tunnels.

The hundreds of miles of flood tunnels were designed to quickly move torrents of water off the streets during flash floods. Dry desert landscapes are baked by the relentless sun for months on end, and when a sudden torrential rainfall occurs, the water cannot be absorbed into the hardened soil.

The resulting flash floods quickly flow over the ground and into the city, causing damage in their wake. To avoid damage to city buildings, flood waters are channeled into the specially-designed flood tunnels under Las Vegas, which can quickly disperse the raging floodwaters. Unfortunately, it can also dispatch the residents of the tunnels.

In 2016, three tunnel people were killed when flood water washed over them in the tunnels.

In light of the very real dangers in the dark, the denizens of the tunnels have developed a communication network to warn of oncoming flash floods. One resident named Matt said that “A lot of us are really good about communicating with each other about when it’s about to rain,” he explained, “so we can just grab their valuables and get out, and leave everything else behind.”

Poverty does not discriminate. In the tunnels there is no distinction between a broke gambling addict and a homeless soldier with PTSD. But there is a hierarchy underground. Due to the large number of addicts in the tunnels, each type of addict has an address. Three separate tunnels are allotted to the different types of drug addicts; one each for users of heroin, meth, and crack. 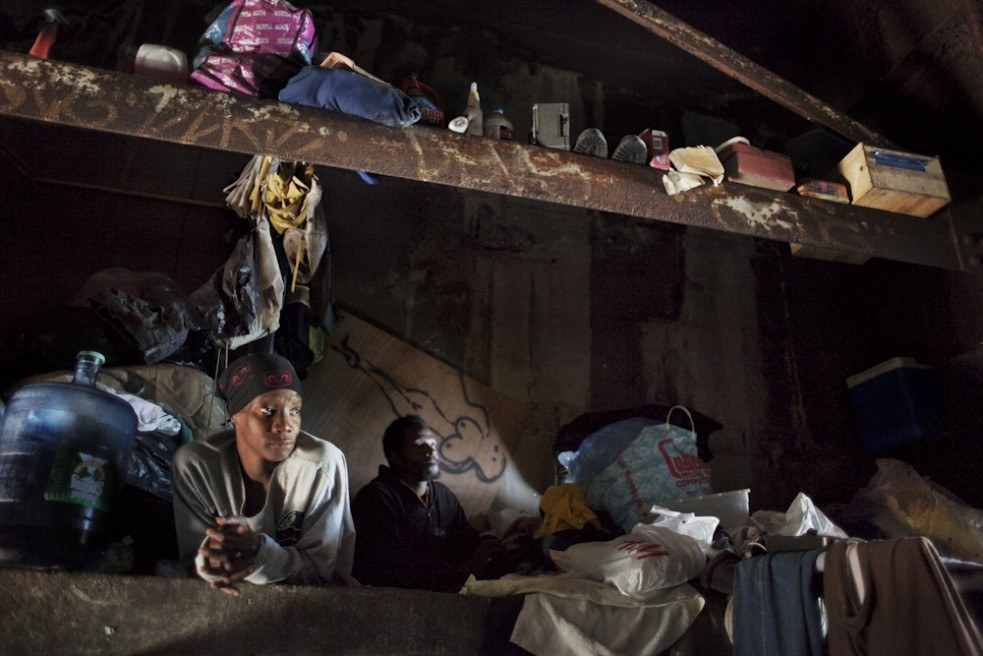 And probably the saddest case of life under the Strip is the children. Several reporters have interviewed the tunnel dwellers over the years, and have been told that children live among them. However, they are kept away from the prying eyes of the public, and the only proof that children live there are the scattered toys and children’s books.

The Measure of a Society

While the high life rages on in the glitz and glamour of the Las Vegas Strip, the low life ekes out a meager existence underground, lost and forgotten. There is a quote from Thomas Jefferson which was repeated by Jimmy Carter: “The measure of a society is found in how it treats its weakest members.”

If the Las Vegas tunnel people are any measure of America, it is in the contrast. Within a distance of only 25 or more feet, millions dump money in the casinos above, while thousands sort through their garbage below.

Many members of the tunnel community emerge late at night to haul away discarded bits of furniture or uneaten food found on the streets of Vegas. Some do it out of embarrassment, others fear reprisal from casino security, who don’t want ‘dirty people’ anywhere near their precious playgrounds.

But some tunnel people have managed to keep a set of clean clothes on hand for brief forays into the casinos. Some resort to sneaking coins out of slot machines under the sleeping noses of drunk gamblers. Others just scour the psychedelic casino carpets in search of stray chips.

Some of the tunnel dwellers landed there as a result of gambling addiction. It is quite easy for a gambling problem to get out of hand, and many of these people will attest to the fact.

The biggest of these problem gamblers will take $5 scrounged from casino floors and gamble with it in the casinos. They think that they will be able to turn loose change into a life change. Many suffer from the illusion that they can win back their house, wife, and life, just by playing their cards right.

And this never happens.

While it’s ‘business as usual’ above ground on the Strip, the tunnel people exist out of sight below. The so-called American optimism has a downside. The majority of Americans believe the illusion of the American Dream; that anyone can be anything in America. They also believe that anyone who hasn’t ‘made it’ in America must somehow deserve their fate. 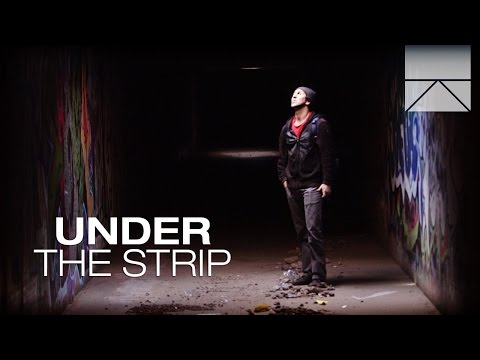 While the mainstream media largely ignores the plight of the homeless in America, a handful of individuals have decided to shine a light in the tunnels. Several books and documentary videos have been made about the tunnel people of Vegas.

Author and journalist Matthew O’Brien stumbled upon the vast underground tunnel community while pursuing a lead in a murder story. The scale of the story grew in magnitude. There wasn’t just a murderer possibly hiding out in the tunnels; there was an entire population of human castaways. Along with photographer Danny Mollohan, O’Brien wrote the book Beneath the Neon: Life and Death in the Tunnels of Las Vegas (2007).

Since then, others have followed the plight of the tunnel people in various ways, including documentary video productions like ‘Out of Sight’ by a channel called Tapped News. The makers of the video wanted to follow up on the story chronicled in Beneath the Neon.

They found several tunnel dwellers to interview, but they were only granted access to the tunnels once O’Brien made the introductions. Once inside, they met some very interesting people, and captured some incredible sights on video.

An ex-con who calls himself ‘Jazz’ lives underground in the tunnels, his camp protected by trip wires and booby traps. Strings connected to cans warn him of incoming intruders who would pose a potential threat.

The tunnels also offer protection from the intense desert heat in the area. According to Jazz, living in the tunnels is a necessity for the Las Vegas homeless people.

“Some people are camped out up there right now, and they look like dirtballs,” Jazz explained, “You can’t do that here… you’ve gotta have some kind of protection.”

Jazz introduced the Tapped News team to other tunnel denizens, and they even got a tour of an underground street art gallery. One section of tunnels has been bombed with colorful bursts of spray-can art and murals, stretching on for miles into the darkness. 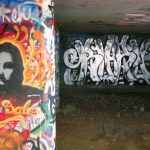 In addition to some street art tributes to some fallen tunnel people, there was also an urban manifesto of sorts scrawled on the wall. Whenever a large number of people gather in the same space, eventually the need for rules arises.

While some people are happy to keep chasing the empty promise of success through hard work, others see through the lies. The working classes own nothing but debt. With a single tragedy like a job loss, the loss of a loved one, or crippling medical bills, we can see how fragile our belief system really is.

In a response to the YouTube video Out of Sight, one viewer summed up the gravity of the homeless situation in America in a single sentence:

“We are all a paycheck away. God help us.”