For over half a century, police have connected Robert “Bobby I” Iannelli to unlawful sports gambling and numbers lotteries all over Western Pennsylvania.

Iannelli is now 88 years old and is from Wexford. He and his son, Rodney “Rusty” Iannelli, 58, from Pittsburgh, have again been accused of heading a gambling operation that prosecutors have stated brought in “tens of thousands of dollars a week.”

Recently, the Iannellis, along with 11 other individuals, were arraigned before District Judge Wayne Gongaware in North Huntingdon. The group appeared in court due to charges filed by the state attorney general’s office. The charges involved illegal sports bookmarking and lotteries dating as far back to 2015.

Duke George, who is representing Bobby Iannelli confirmed that his legal team recently received the paperwork for the charges. George says, “We have to go through the discovery process and see where we legally go forward from here.” Michael Foglia, the family’s attorney who represented Rodney Iannelli, quickly defended the older Iannelli when a reporter questioned him about Bobby Iannelli’s long illegal gambling history. Foglia stated, “His [Iannelli’s] last incident was 25 years ago.” 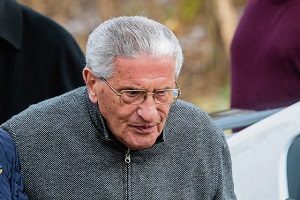 “Bobby I” Iannelli was identified as an associate of the former LaRocca-Genovese La Cosa Nostra organization in Pittsburgh in a Pennsylvania Crime Commission report in 1990. He had been on the police’s radar for quite some time at that point.

According to newspaper archives, the elder Iannelli incurred a fine of $100 in November 1959 after a police racket squad in Pittsburgh found him and one of his brothers with 21,000 football pool sheets. In the decades that followed, Iannelli was arrested several times. One of his arrests was a 1970 police takedown of a huge sports gambling ring operating out of his home in Ross Township.

Former Pennsylvania governor and U.S. Attorney General Dick Thornburgh stated in his autobiography “Where the Evidence Leads” that the first effective wiretaps in Western Pennsylvania were able to take Iannelli’s $15 million operation down. The takedown led to the first prosecutions under the Organized Crime Control Act, which went into effect the following year.

After being found guilty, Iannelli received a three-year prison sentence according to accounts from news sources. Bobby Iannelli refused to testify before a federal grand jury in the 1970s concerning his associates, which earned him 18 more months in prison.

Bobby Iannelli was indicted in the mid-1970s. Later, he received a two-year prison sentence when he was convicted on counts of gambling. He was relatively quiet in the 1980s, but was in the news again in 1990 for being the kingpin of an organized crime operation that spanned across several Pennsylvania counties.

Investigators wiretapped a number of cell phones to hear conversations pertaining to the sports and numbers betting ring, which was worth about $7 million, according to news accounts that were reporting the story at the time. Because of the crime ring, Iannelli was convicted of bookmaking, conspiracy, and illegal lotteries. Because of this, he was sentenced to eight to 23 months in prison.

Neither Iannelli nor his son made any comments at the arraignment. February 26 is the date set for preliminary hearings for all defendants involved in the case.

Others Charged In the Case

Attorney Patrick Thomassey of Monroeville represents two defendants in the case who are from Westmoreland County. They are Victor Marchitello, 70, from Harrison City and Frank Joseph Pasquino, 74, from Irwin. The attorney stated that he was shocked the state would dedicate three years of resources to the investigation.

Thomassey stated, “It’s a gambling case. It has been a long since I have had one of these. I guess if the state does it, it is OK, but if a private citizen does it…its illegal. We’re going to have to investigate the laws further and see what we can do with these charges.”

The Iannelli father and son are charged with two counts each of corrupt organizations. The duo is also charged with dealing in proceeds of unlawful activities and additional counts of bookmarking, illegal lotteries, and criminal use of a communication facility and conspiracy.

According to TribLive.com, other defendants involved in the case are as follows:

James Roger Martorella, 69, of Pittsburgh; Marchitello; Vincent M. Rapneth, 61, of Verona; Levi Wilson Helsel, 26, of Pittsburgh; Pasquino; Kathryn Venturini, 72, of North Huntingdon; and John James Harkins, 70, of Pittsburgh are all charged with corrupt organizations, criminal use of a communication facility and conspiracy and illegal lotteries.

Arden Keith Metcalfe, 62, of Monongahela, and Floyd A. Panella, 67, of Beaver, are charged with engaging in pool selling/bookmaking.