Since they began football play in 1892, the Crimson Tide can claim two Heisman Trophies and 17 national championships. Six of the championships were under legendary coach Paul “Bear” Bryant and five were under current coach Nick Saban. The football program has nearly 930 victories in the NCAA Division I. The team has set records in post-season bowl appearances (64). It has had 23 winning streaks of 10 or more victories in a year and 19 seasons starting at 10-0. The team holds a winning record against every current member of the SEC. In fact, the Tide is the only program to win the Southeastern Conference title in every decade since the conference began in 1933. No other program comes close. 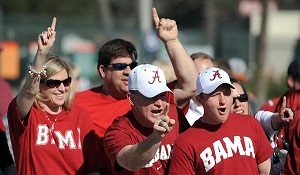 There is a lot of tradition surrounding Alabama fans. The elephant mascot has been around since the early 1930s. The “Roll, Tide” expression made its first appearance in the 1930s as well. A reporter coined the expression Crimson Tide in 1907. The fans even have their own criteria by which they judge each other. A fan judges another by the number of times he or she has visited the Bear Bryant Museum. In addition, fans judge each other by the amount of gear they wear or carry to an Alabama football game. Fans can also tell you exactly where they were – or where their parents were—the day Bryant died. When there is a coaches’ press conference, usually all but the most die-hard fans and reporters attend. But, at an Alabama football coaches’ press conference, it’s standing room only. Needless to say, Alabama fans bleed crimson and cream.

The rabidness of ‘Bama fans translates into the stadium. The average attendance for every single home game in Tuscaloosa’s Bryant-Denny Stadium is nearly 102,000. It doesn’t matter who the team is playing. Not only do Alabama fans set records at home, but also on the road. The number of fans who attend away games is higher than any other fan base for college football. Their total attendance for all games home and away was 1.5 million in 2017.

The Bet and the Rationale

At the end of September, the then 5-0 Crimson Tide played the 1-3 Louisiana Lafayette Ragin’ Cajuns. The spread was 50 points in Alabama’s favor. In Las Vegas, before the game began, a die-hard Alabama fan plunked down $1,579.65 to win — $1.60. While it’s safe to say the Vegas sportsbooks have seen a lot, it isn’t likely they see this every day.

At the time of the bet, Alabama was a 99,000-1 money line favorite in Las Vegas. That is the maximum value allowable by the sportsbooks in Las Vegas. Of course, there are critics who would say that the man who placed the bet really wasn’t risking much. Alabama has been ranked first in the nation according to the Associated Press. It has not lost a game in football since the loss to Auburn last year. And, that really doesn’t count because it’s an ugly rivalry game. Louisiana-Lafayette lost the week before to Coastal Carolina. In other words, the bet was fairly safe. However, gambling experts would mention that at least once a week, a heavy points spread favorite loses. Luckily, for this rabid Crimson Tide fan, his bet was a winning one if a crazy one.