A viral video shows at least a dozen men and women brawling in bathing suits in the Hard Rock Casino in Hollywood, Florida over the weekend. It is uncertain who or what started the fight.

What began as a normal outing in a hotel casino resort in Florida ended in a massive brawl and multiple arrests in the Seminole Hard Rock Hotel/Casino in Florida. Parts of the incident were captured on video and released over social media channels, where it went viral. The two-part video of the brawl was viewed over 4 million times since Friday.

The brawl escalated into a free for all, with men and women punching and kicking each other, screaming epithets at each other, and refusing to stop the fight when casino security intervened. The video showed a 2-minute-long section of the middle of the brawl, so it was uncertain how the fight broke out or who started it.

One man wearing shorts and a t-shirt was seen punching a man wearing bathing shorts, then kicking him in the head when he fell down. As the chaos continued, women fought with women, pushing and punching, and another man is seen punching a woman in the face. At one point during the melee, someone is seen picking up a hotel lobby barrier pole and striking another person with it. 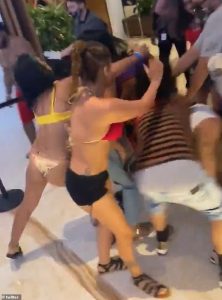 The end of the video was not seen, but the end result is predictable: several people were arrested and all involved in the fight have been banned from Hard Rock properties. Gary Bitner of the Seminole Tribal Police told press that “‘Surveillance cameras are everywhere and any bad behavior will be captured on video for law enforcement,” he said. “Behavior like that will not be tolerated.”

Miami resident Manuel Aguilar, 26, was arrested and held on a $1,000 bond. He faces charges of disorderly conduct, a first-degree misdemeanor, and possession of oxycodone, a third-degree felony.

Police arrested 30-year-old Rafael Redondo and charged him with disorderly conduct. The Hialeah resident was held on a $100 bond.

One of the women involved in the fight, 26-year-old Jenae Strunk, was arrested and charged with disorderly conduct.