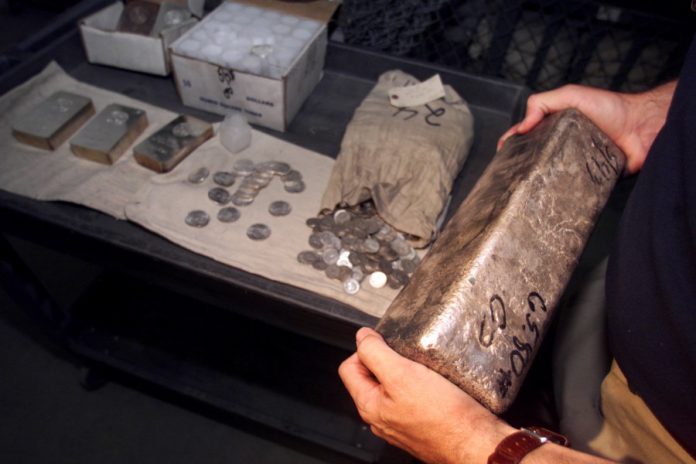 In Short: Deputies are searching for 3 men seen on surveillance cameras trespassing and digging for treasure in the backyard of the late casino heir Ted Binion.

A manhunt is underway for 3 men suspected of trespassing on the former property of casino heir Ted Binion. Surveillance cameras caught images of the 3 men entering and leaving the Pahrump property with shovels. Rumors of undiscovered buried gold and silver bars on the property persist, and occasionally draws illegal treasure hunters.

The Sheriff’s office in Nye County, Nevada, has identified one man from the surveillance footage, and has asked for public assistance in identifying the other 2 men. The man identified and sought for the crime is 56-year-old Richard Cleaves, a former Binion employee who worked on the property.

Cleaves was previously arrested in 2017 for digging holes on the property. He told deputies that he’d “read online that there was millions of dollars’ worth of gold buried on the property, and he wanted to find it.”

After the incident, deputies and detectives entered the Pahrump, Nevada property and found several holes dug around the 138-acre property. One of the holes was found near a demolished brick BBQ smoker, and the other holes were found inside the main structure on the property. Pahrump is located 60 miles west of Las Vegas, near the California border.

Ted Binion, the late heir to casino magnate Benny Binion’s fortune, was said to have buried millions of dollars in gold and silver bars in and around several of his properties in Nevada. Ted Binion died of a heroin overdose in 1998, and the locations of the rumored buried treasure died with him.

“Everybody knew that Ted buried money,” said Cathy Scott, author of “Death in the Desert: The Ted Binion Homicide Case.”

Deputies previously found $5 million in silver bars on one of Binion’s other Pahrump properties in 1998. Binion owned several properties in Nevada, and rumors of undiscovered buried treasure abound. Several attempts to dig up the hidden loot have been made—and foiled—over the years, by people who insist that there’s a wealth of hidden silver, gold, and other precious metals lying undiscovered in the Nevada desert.

Ted Binion was the son of casino magnate Benny Binion, founder of the famous Binion’s Horseshoe casino in Las Vegas. The Binions also founded the World Series of Poker in 1970. The WSOP is the most respected and lucrative poker tournament in the world, with hundreds of players gambling for millions every year in Las Vegas and in global WSOP tournaments.

Ted Binion’s body was found face up on the floor of his 6,700-square-foot home on September 17, 1998. He was 55 at the time of his death, which was initially ruled an overdose of heroin and Xamax. Later, his girlfriend, Sandy Murphy, a Vegas stripper, and her lover, Rick Tabish, were arrested for his murder.

Tabish was found 2 days after Binion’s death digging for $7 million in silver in an underground vault he had built for Binion in Pahrump. Sandy Murphy and Rick Tabish were arrested for suspicion of murder. What followed was a lurid media spectacle filled with tales of sex, drugs, murder, and buried treasure.

The couple were prosecuted for forcing Binion’s overdose and plotting to kill him and plunder his riches. They were eventually acquitted of the murder charge, but found guilty of lesser charges of conspiracy, burglary, and grand larceny.

Cathy Scott, crime author and investigative journalist, claims the buried treasure rumors are true. “Oh, I think absolutely it’s more than a rumor,” she said. She went on to explain how stashing money was Binion’s way, that he didn’t trust banks. He also wanted to hide money from the IRS, so hidden vaults and buried bars of silver and gold were par for the course.

How much treasure—if any—is still out there? Considering the billions the Binions made with their casino empire, the treasure map could be huge. But deputies may have found the one and only hidden cache of cash when they discovered the first $5 million.

Or maybe that was just the tip of the iceberg.