The gambling Bill is among the new legislation that is in various stages of debate in the Senate, even as the first third of legislative session concludes. The gambling Bill is part of the high-profile legislation that the senators are deliberating.  Some of the bills are showing promise of passing through the approval process by the Senate, while some of the bills are showing little progress.

Two contesting bills with divergent gambling’s proposals face off in the Senate. It is highly unlikely that both bills will see the light of the day, and only one might go through the Senate committee to the Senate floor for discussion. The two Bills receive a bipartisan backing, with both parties divided on the approach towards supporting or rejecting the lottery bills. 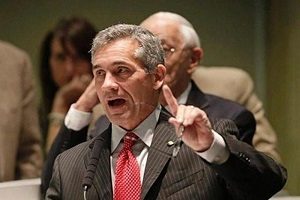 According to reports doing rounds in the Senate, the sponsor of one of the Bills is the Senate President Del Marsh. Sources familiar with the lottery draft reports that the bill will offer the voters only one option, to vote on a lottery. This option will ensure that the Native Tribe- Poarch Creeks continue single-handedly controlling the gambling industry in Alabama. The monopoly entrusted on the Poarch Creek has seen the native tribe rake in billions in revenue collected from gambling activities over the years.

The bill also co-sponsored by Senator Jim McClendon, will see the division of gambling revenue between the General Fund and the Education Trust Fund. Other forms of betting, including electronic bingo, will be allowed in Mobile County and other four locations within the state of Alabama.

Senator Greg Albritton is a co-sponsor to a counter bill to that reportedly proposed by Senator Del Marsh. Describing his proposal as a conservative option, Senator Albritton will create a paper lottery only, discouraging the expansion of other forms of gambling. The lottery only bill will see different forms of gambling frozen in the state of Alabama. The bill aims at raising revenues from gambling as a state trust repayment fund going back to 2012. Once the revenue collected clears the debt, half the fund will go into the fund development while the rest included in a General Fund. The General Fund will be used to fund many state departments, from prisons, hospitals, schools, and law enforcement.

The proposal will not interfere with already existing legalized gambling activities within the state but will restrict their expansion in the future.

The road to legislation

For the bills to be legislated into law, they have to undergo the rigorous and treacherous debate in the Senate. They have first to pass the House committee before moving to the Senate floor for debating after which the senators will take a vote.

The likelihood of both bills passing through and signed into law is minimal. The proposals are contrasting each other, and only one is likely to go through, amid a lot of lobbying and opposition.

The bills, should they pass, will alter the course of the gambling industry not only in Alabama but also across the United States. The proposed legislation will be a pedestal for other states to gauge and stage their gambling laws soon. It will be interesting to note how things will unfold, especially relating to the two contrasting and divergently opinioned gambling bills.