Senator John McCain was a military hero and a prisoner of war, whose father and grandfather were both admirals. He was a well-respected statesman who advocated tirelessly for veterans and for the citizens of his state. However, John McCain was also a prolific gambler, who advocated for all forms of gambling, except one. John McCain did not think sports betting was a good idea, because he believed that sports books ruined the integrity of the game.

John McCain was born in the Panama Canal zone, because of his father’s military service. His father’s career led McCain to go to as many as 20 schools before he graduated from high school. He graduated from the United States Naval Academy and became a Navy pilot. He was almost killed in Vietnam twice: once on the USS Forrestal fire, and again when he was shot down during the war. He was a prisoner of war for over five years, which left him with lifelong disabilities. After he retired from the Navy, he became a representative and then a Senator from Arizona. He ran for president twice, but was not successful. He fought on the side of veterans, specialized in foreign policy and also supported free enterprise and a smaller government. He was diagnosed with brain cancer in 2017 and died a year later. 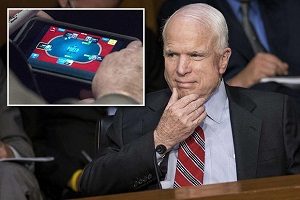 John McCain enjoyed gambling, especially poker. Once he was caught by a reporter playing a free poker app on his phone during a Senate Committee meeting on Foreign Relations. The Senate was discussing whether or not to allow military action against the Syrian government, which was battling with rebels who opposed the dictator.

The senator had a reputation for gambling that was well known in Washington, D.C. During the 2008 presidential election, McCain found a way to relieve pressure by going to a nearby casino and shooting craps for over 14 hours. He never said whether he won or lost. The press also reported on his poker prowess while out campaigning. He was known to gamble less than $10,000 at a time and loved going on gambling junkets to casinos in Vegas and Atlantic City.

Legislation that McCain Supported and Denied

One would think that because McCain was a prolific gambler, he would have been in favor of gambling legislation, but he was not. There were times that McCain supported gaming legislation, helping to legalize tribal casinos But he also voted against several other gaming measures.

In 1992, McCain and 35 other Republicans voted to support the law that prohibited sports betting on single sports games in every state except for Nevada. This law was in place for 25 years until the Supreme Court overturned it in May, stating that each state had the right to decide for itself on sports gambling. Since then, a handful of states—New Jersey, Delaware, West Virginia, Pennsylvania, and Mississippi—have legalized sports betting, either at racetracks or casinos.

In 2001, McCain again demonstrated his opposition to gambling on college sports when he proposed a bill that would prohibit Nevada from accepting bets on any and all college games. In addition, McCain remained opposed to online gaming of any kind even though he received gaming contributions throughout his career. He received over $2 million in donations from gambling companies during the 2008 campaign and another $1.2 million in 2016.