Macau casinos have seen better days since the pandemic decimated revenues, but now they are preparing for a major influx of visitors during the Chinese holiday of Golden Week.

Since 2000, Chinese nationals have enjoyed the week-long holiday season known as Golden Week. During the week of October 1-8, companies give Chinese workers paid leave, and nearly one billion people take a vacation. 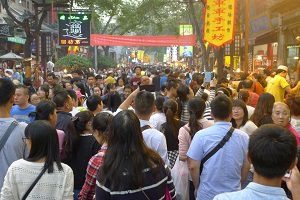 Beginning with China’s National Day on October 1, Golden Week marks the largest mass migration of humans on the planet. And this year, despite the pandemic, millions of them are descending on Macau for a great time.

Macau is a hotspot for gambling tourism since gambling is illegal in mainland China. Macau’s status as a special administrative region (SAR) of China makes the migration easy, as gambling is legal in Macau.

Macau’s gross gaming revenue fell nearly 82% during the pandemic lockdowns, but strong hotel bookings for the upcoming Golden Week signal an optimistic October for Macau. Last month the Macau government re-instituted the Individual Visit Scheme (IVS) to fast track visitors from Guangdong and Zhuhai provinces, and they are allowed to come and go without quarantine.

When supply is limited and demand goes up, so do the prices. During Golden Week, the average Macau resort is charging 50% – 100% higher rates than usual. Since most Macau hotels are booked at 80% capacity, Mandarin Oriental’s normal rates have gone from $313 per night to $406 during Golden Week. MGM Macau went from $134 per night to $319, and The Venetian is more than doubling down at $285 per night; the normal rate is $134 per night.

Most of the five-star hotels on the Cotai Strip have sold out for Golden Week. Two weeks ahead of Golden Week, five hotels reported being fully booked: Ritz-Carlton, Four Seasons, Morpheus, StarWorld, and Studio City.

Macau’s 35,000 guest rooms were booked at only 12% capacity in July, but Golden Week promises a near sell out of all resort properties. Last year, Macau revenue during Golden Week jumped by 57%, and this year promises to better those numbers.

Elsewhere in the world, mass human migration has slowed to a standstill, most notably at Munich’s annual Oktoberfest, which was cancelled this year due to the pandemic. Oktoberfest has drawn millions of people every year since 1850, and has only been cancelled previously during wartime and two cholera epidemics.