The first tribal casino to be opened in Indiana saw enormous crowds streaming through the doors this week as the state makes its first forays into Native American gambling.

The southwestern side of South Bend was chosen for the Four Winds casino, which is the fourth property in the Pokagon tribe’s portfolio. It already comprises three existing casinos in southwest Michigan. The leaders of the Pokagon and Band of Potawatomi Indians and Pete Buttigieg, mayor of South Bend, opened the casino together during a ceremony on Jan. 16. Hundreds of people entered the facility as soon as its doors were opened. 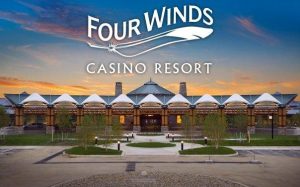 The 175,000-square-foot Four Winds Casino has just around 1,800 electronic gaming machines and boasts no less than three bars and four restaurants. The venue employs more than 1,200 local people and brings a much-needed economic boost to the region. The new casino won’t have to pay state taxes, which gives it a strong business advantage when compared with the 13 casinos already established in Indiana.

Each one pays around 27 percent in local and state taxes on profits made from gambling. Similar in both appearance and size to the tribe’s New Buffalo casino, the South Bend property uses architecture and décor that has been inspired by the tribe’s history, including native basketry work and a fire that constantly burns in the rotunda to represent the Potawatomi culture’s ceremonial fires.

Although the new casino is great news for local players and job seekers, a study conducted for the Casino Association of Indiana estimated the tribe’s casino will slash the amount of tax revenue for the state by more than $350 million in its first five years because it’s likely to reduce the amount of business at the other casinos in Indiana while paying no state gambling tax itself. 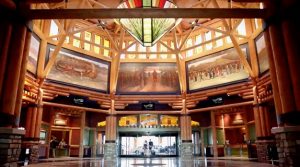 It’s no wonder there are concerns among the companies operating Indiana’s existing casinos, considering that when the same tribe opened its Michigan Four Winds Casino Resort, which was only 4 miles from the state line, it started to immediately siphon away business from Indiana’s Blue Chip Casino Hotel Spa. Over the course of a single year, $58 million of gaming revenue was lost and 165 employees lost their jobs.

It, therefore, comes as no surprise that Indiana state offices as well as the state’s entire casino industry, are bracing for another huge hit that will come from the increased competition from other gaming operations that have opened nearby. With a 35 percent drop in the state’s casino tax revenue over the last seven years, the future isn’t looking bright for the industry.

Success for The Pokagon Tribe

On the other hand, it’s great news for the 5,000 citizens of the Pokagon tribe, who live in northern Indiana and southern Michigan. Revenue from the tribe’s casinos has had a major impact, helping to supply the essential financial support so many of the Pokagons could return to their ancestral homelands and help provide other services, such as health care.

None of Indiana’s other Native American tribes has ever come anywhere close to opening a casino. A tribe must first be recognized federally and then given a land grant from the government.

This represents the first time in two centuries that Native American land has been found in Indiana. The tribe is now building a police station and homes to house six tribal families who are eager to move onto the property.

Tribal gaming has really taken off since 1988 after the passing of the Indian Gaming Regulatory Act, and, in 2016, its gaming revenue came to an all-time high of $31.2 billion. Twenty-eight of the 50 states already have tribal gaming.

While this is great news for the Native American population, existing casinos and the states that rely heavily on the revenue from them, are being put in an increasingly challenging position.