Sheriff Charles Reader became famous in Ohio and all over the world because he was able to solve the most notorious murders the county had ever had—the murders of six members of the Rhoden family. The Rhoden families were pot farmers who lived in the rural part of his county. Pike County, Ohio, located in the Appalachian region of Southern Ohio, was not famous for much else—until an anonymous complaint led to allegations that the sheriff stole money his department confiscated from drug busts, and used it to feed his gambling addiction.

The county has a population of nearly 30,000 people. Most people that work in the county work in a variety of mining and manufacturing jobs. There are also oil and gas extraction jobs in the area as well. Pike County is located in an area where many people do not lock their doors at night, and neighbors meet each other on the baseball field during the summer to watch baseball games.

However, the county had an underbelly as well, which was brought kicking and screaming into the limelight in April of 2016. 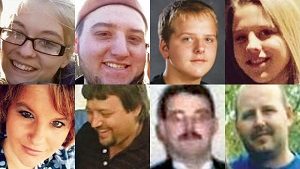 Eight people in one family were shot and killed in four homes on the same property in the county. The only survivors were three young children. While the county was reeling in shock from the murders of the Rhoden family, there were more shocks to come. The sheriff’s department began investigating and found out that the family had been running an illegal marijuana grow industry and cockfighting scheme on their rural property. While many people made up their minds the reason the family was killed because of their involvement in illegal activities, the sheriff’s department continued to investigate.

In fact, the truth was much sadder. The investigation found that all of the members of the Rhoden family were murdered over a custody dispute between a man and his ex-girlfriend. The man, his parents, and his brother were all arrested and charged with murder. All of the publicity with the case made Sheriff Reader a famous face in the area.

Experts say it may have been all of the notoriety that led to an anonymous complaint into the goings-on at the sheriff’s department. The tipster said that Sheriff Reader ran his department with an iron fist. He did not take kindly to people who tried to give him direction. In fact, many people in the sheriff’s office have said that for Reader, it was his way or the highway. Many people were afraid to speak out against him, because he operated an atmosphere of fear in the office.

However, the allegations, if true, are troublesome. They were troublesome enough for a grand jury to launch an investigation into the problems with the sheriff’s office. First, the complaint alleged that the sheriff had a gambling problem. A significant gambling problem, which had caused him financial trouble. He has borrowed thousands of dollars from his employees in the past to try to pay off his gambling debts.

In order to feed his gambling addiction, the sheriff had been taking cash from drug busts and using that money to pay off his gambling debts. The proceeds from drug busts have been a cause of disagreement at the local, state, and federal level. They have also been criticized by many social welfare groups. The groups have discussed that many police departments across the United States seize cash; cars and even houses without due cause, and use the money for their own personal slush funds.

The tipster told authorities the sheriff had a safe in his office where the cash proceeds were kept. Whenever he needed money for gambling, he would raid the safe. The sheriff has hired an attorney, and an investigation by a special prosecutor from the state is ongoing.