More and more states are making sports betting legal. States are starting to see the benefit of this for various reasons. States, including Nebraska want to legalize sports gambling because it will reduce property taxes. However, as with most major financial decisions concerning regions and states, all Nebraskans aren’t convinced. There is a convincing argument for permitting sports gambling in the state. The success of legalized gambling in other states could convince more citizens in Nebraska that sports gambling should become part of the state’s revenue. 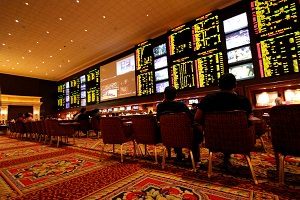 Vegas has been well-known for gambling for quite some time. Sports fans from all over the world often come to Las Vegas to bet on their favorite teams. Of course, there are several other gambling activities for adults to take advantage of while in the city to enhance their overall gaming experience.

Popular spots in Las Vegas like Mandalay Bay has a lucrative sports book. Bettors placed wagers on horse racing and baseball. At the time of the sportsbook evaluation, the NBA preseason was a few weeks away and the preseason for the NFL had just started.

Two bettors, Emily Force and Javi Sulaiman, who were visiting Vegas from Los Angeles, won $100 due to a bet they’d made on a Cubs game. The gamblers made a second bet that day, but didn’t disclose the details because of superstition.

Sulaiman, 43, also revealed that he’d been gambling for quite some time. He stated that while he was in his 20s he was a “small-time bookie” in Milwaukee. Sulaiman also shared that he and his friends would drive from San Diego to Tijuana to bet on baseball when he was in college.

In the very near future, it may not be necessary for gamblers to go across the border to place their bets. In May 2018, the Supreme Court overturned a law established in 1992 that prohibited legalized sports betting. A number of states have already made sports gambling a legal practice and other states are strongly considering it, including Nebraska.

If Massachusetts makes sports betting legal, Force, who is a native of the state, said that she’d support it. Force stated that she felt gambling would be “safer if it’s legal.”

Gambling trade group the American Gaming Association, estimates that there is an illegal sports betting market worth $150 million in the U.S. This indicates that sports betting is already taken place all around the country.

Several state officials and gaming experts even say that if states don’t have a serious windfall in taxes after sports betting are legal, it’s worthwhile to reduce the market. This will raise tax revenue and protect bettors if there are wager disputes.

Sports betting will likely vary by state. Some lawmakers are waiting to see how beneficial betting would be in their states, while others are emphasizing mobile gambling over placing live wagers.

There are some states, including Rhode Island and Pennsylvania, that have chosen high taxes in terms of betting. Lawmakers in other states are also considering charging “integrity fees” which are paid to the sports leagues to monitor betting activity and stop problem gambling. Major casino operator and owner MGM also announced a deal with the NBA recently to ensure bettors have access to data.

As far as Nebraska is concerned, sports gaming is still illegal in the state as of May 2018. However, there will likely be new legislation that will make the practice legal at the start of next year’s legislation. A number of Nebraska senators have expressed their interest for legalized betting. However, since gambling is not legal under the Nebraska Constitution, voters would have to approve an amendment to the state’s constitution.