A couple in Bishop was recently arrested after several law enforcement agencies in South Texas conducted search and seizure warrants for illegal gambling.

Authorities served the warrants at Bishop Residence, three storage units in Kingsville, a storage unit in Bishop and an illegal gambling venue and payout business in Odem, the release states.

The Silver Dollar Game Room was shut down. The business was just outside the city limits of Odem on US Highway 77. The release states that authorities took ledgers, count sheets, video game machines, and around $17,000. Authorities also seized money from an Odem business called Elco Auctions. Approximately $18,000 was seized from this payout location.

The Elco Auctions website states that it is a “subsidiary of National Auctioneers & Liquidators, Inc. established in 2008 as an asset management company.” According to the website, the mission of Elco Auctions is to “assist business and property owners in obtaining the full market value of their assets in a timely manner.”

Silver shot, or silver that is similar to marble, was seized from Elco Auctions, according to the news release. Authorities seized over 42 pounds of silver shot. Financial documents, count sheets, and ledgers were also taken from the business. Over $86,000 was seized from the Bishop home, which is about 30 miles from Odem.

More on the Suspects

Eddy Lee Frost, 66, and his wife, Karrian Dear, 62, were arrested on suspicion of gambling promotion, keeping a gambling place, possession of a gambling device/equipment and engaging in organized criminal activity, according to the news release.

There were additional arrests in Odem by the San Patricio County Sheriff’s Office deputies on suspicion of the same charges. The names of the other suspects were not released.

The release also pointed out that the US Border Patrol Station in Kingsville than the Homeland Security Investigations office in Corpus Christi helped with the investigation. 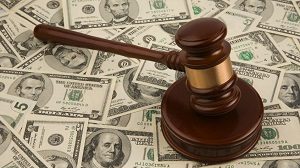 Even though Texas Hold ‘Em is a popular game, betting on card games is actually illegal in Texas. Gambling laws in Texas are, and Texas residents and visitors are only permitted to bet on dog and greyhound racing and horse racing. There are a few exceptions to this rule, including social gambling like office pools, charitable raffles, and bingo. Generally, betting on games of chance other than dog or horse racing is outlawed in Texas.

According to Code Section PEN 47.01 et seq.; Civ. St. 179e, gambling is defined as an agreement to win or lose something of value solely or partially by chance.

The rules for dog racing and off-track betting for Texas state that there have to be no more than three racetrack licenses for greyhound racing. On-track pari-mutuel betting and simulcast races are also legal.

Casinos are not legal in Texas since this falls into “keeping a gambling place” which is against Texas laws.

Other Types of Gambling That Is Permitted or Banned

Keeping a place of gambling or promoting gambling is illegal, as is relaying gambling information. Texas residents are also not permitted to possess gambling devices with the intent to engage in gaming. Raffles sponsored by charity organizations, as well as organized bingo games and social gambling is permitted. State laws also allow bona fide contests of skill.

Texas residents are not permitted to own or operate casinos. However, Native American reservations are not subject to the gambling laws of the state. There is at least one Native American casino on native land in Texas.

Social gambling is widely accepted in Texas. Charity auctions, private card games, and bingo games are forms of social gambling. However, these forms of gaming could be unlawful if the “house” takes all or part of the proceeds. According to Texas law, gambling must be conducted in a private place. The only person who should benefit from the bet is the winner of the bet, and the chances of winning must be equal among all participants, excluding luck and individual skill.