In a town famed for its ‘everything goes’ motto, you’d be surprised how many things just don’t fly in Las Vegas. And the banned activities and actions are just as bizarre and gaudy as Sin City itself. From pigeon law to pawn shop faux pas, violate any of these ordinances and you’ll be drummed out of Vegas on the camel you rode in on. 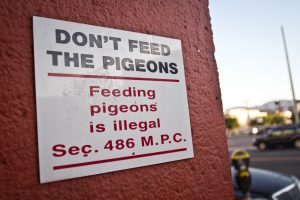 For some reason, some people think that feeding pigeons is a good idea. Las Vegas law says otherwise. Classified as vermin by Las Vegas law, feeding these ‘flying rats’ is punishable by a hefty fine or jail time. The reason? With so many millions of Vegas visitors each year, overfed pigeons poop all over the glitzy Vegas scenery. And that’s a seriously fowl mess. 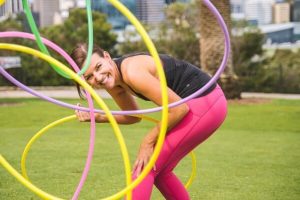 Apparently the hula hoop craze that swept America in the 60s was taken so far as to be banned in Las Vegas. What started as a harmless child’s game which mimicked the hip-swaying hula dancing of Hawaii gained traction; adults started hula hooping as well.

When unlicensed street vendors started hula hooping to attract tourist attention, the results quickly spiraled and spun out of control. They weren’t just small hula hoops they were using and abusing on the streets of Las Vegas. Hundreds of hula hoopers with giant hula hoops became such a nuisance that they were blocking pedestrian traffic and obstructing the entrances of shops.

So they had to go.

No Camels on Highways 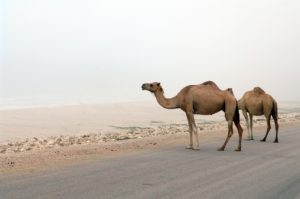 This type of law might be commonplace in countries which still employ camels as a vehicular mode of transportation, but in Nevada? During the expansion of the West, camels were used to transport goods and people in the Nevada deserts in the late 1800s. Their excellent adaptability to desert environments made them superior to horses – which often keeled over and died when pushed too hard without water.

Once the motor car became commonplace, highways were built, and any remaining camels were too slow and dangerous for road use. So Nevada passed a law prohibiting camels on highways. And the law is still on the books to this day. Oh, and that goes for Camel cigarettes as well; dump ‘em in an ashtray, not on the highway.

Pawning Your Dentures is Illegal in Las Vegas 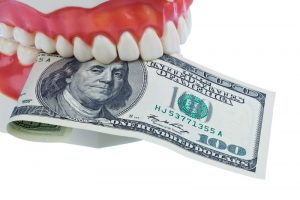 Apparently, Vegas casinos must have witnessed a rash and abnormal outbreak of seniors who blew all their money, then went puttering down to pawn shops to obtain more gambling money. Since you can’t enter casinos shirtless, we’re assuming that some unlucky old gambler tried to pawn his dentures.

It is hard to believe that a pawn shop would take used dentures for any monetary compensation – or that someone would later buy them and stuff them in their mouth. But apparently this must have happened exactly enough times to warrant an actual law prohibiting this activity.

No Slavery in the Vegas City Limits 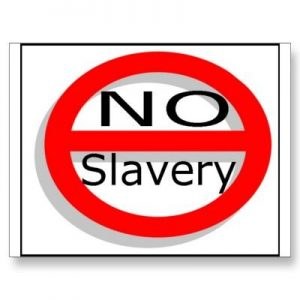 This one seems like a no-brainer, since slavery was confined to the Southern states and banned in the mid-1800s. Maybe some Vegas visitors were confused when the 1960s Caesars hostesses would greet them with the words “I am your slave.” In today’s world of punishment for using the wrong words, Las Vegas casinos no longer employ such shenanigans – even if it’s part of the overall theme.

Maybe when they were building the giant Luxor pyramid and Sphinx in Vegas, the designers decided to make the project truly authentic by the use of actual slave labor, just like they did in ancient Egypt. Good thing the No Slavery law kicked in just in time. 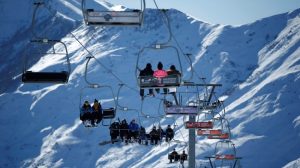 You wouldn’t expect to see a chairlift outside of a ski resort, but apparently there’s a Las Vegas law banning people from throwing things from chairlifts. Today you’ll see people zipping from building to building high overhead on special zip lines. We’ll assume this law applies to them, and that sometime in the recent history of Vegas, chairlifts were used in and around the city.

File this one under ‘common sense.’ 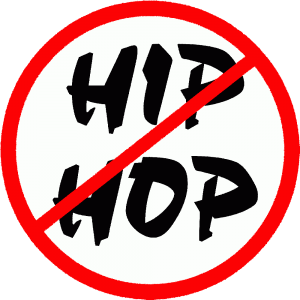 During the 90s, the East Coast vs West Coast rap rivalry was ramping up to deadly levels. Drive-by shootings became commonplace, and legendary rapper Tupac Shakur was gunned down in Las Vegas by an unknown assailant. The shooter was never caught, and after East Coast rapper Notorious B.I.G. was also gunned down months later, Las Vegas banned hip hop and gangster rap performances. They associated the music with violence.

Sadly, this did not stop the gun violence in Las Vegas. In 2017, a shooter fired thousands of rounds into a crowd at a country music festival on the streets below. The shooter had secretly stocked his room with assault rifles and ammo, opened fire on the crowd, killing 58 people and injuring more than 800, before taking his own life.

Fortunately, they haven’t banned country music yet. There wouldn’t be many types of music left if they did. 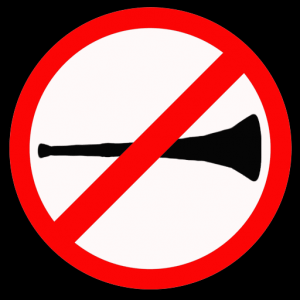 That loud, cheesy, plastic noisemaker popular in the seedy soccer hooligan world has no place in Vegas. The Vuvuzela is an extremely loud and annoying trumpet-like thing from South Africa which was first seen (and heard) in the 2010 World Cup.

But then they started cropping up all over the world. Soon they appeared in many of the various sporting events in Vegas, including the U.F.C. The decision was made by U.F.C. president Dana White during a fight between Brock Lesnar and Shane Carwin.

“This decision was pretty simple,” White said. “Vuvuzelas make the most horrific sound I’ve ever heard. I’d rather let Brock punch me in the face than hear 15,000 people blow on those things.” 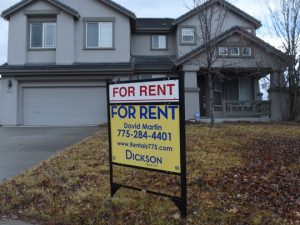 Since Vegas likes to party 24/7, the gambling mecca sees millions of visitors per year, and not all of them stay in the resort hotels. But the locals didn’t like the idea of a bunch of frat boys renting a house next to them for a weekend and causing general mayhem.

So they somehow convinced city council members to create a law that banned house rentals of less than 30 days. And they’re serious about that law, too. A Vegas homeowner was fined $29,000 for violating that housing rental law.

Sorry, Airbnb. Hit the road and peddle your snake oil in another town. 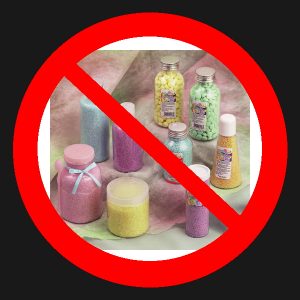 In the age of all these ‘wellness’ products like Agave Oil Tampons or Holy Guacamole Shampoo, you wouldn’t think there would be much use for good old fashioned bath salts. Those were the ancient, powdered ‘salts’ dumped into claw-footed bathtubs by your grandparents.

Until now. Apparently, the famous party lifestyle ever-present in Vegas has graduated from the usual booze/hookers/gambling weekend – to getting high off of bath salts. When eaten, snorted, smoked, or injected, bath salts have narcotic effects. Not to mention the poor users often wind up in the hospital suffering heart palpitations and hallucinations from chasing the bath salt dragon.

No Shooting Animals from Planes 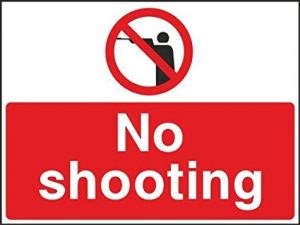 Your flight is making the descent into Las Vegas International Airport, and then you see it: a wild jackrabbit scuttling around on the runway. So naturally, you take out your rifle, open up the jet doors, and shoot the rabbit. But you can’t do that because A) you can’t get your guns onto planes, B) opening the door of a jet aircraft in flight is a really bad idea, and C) shooting animals from planes is illegal in Vegas.

We’re assuming that the Vegas law against shooting animals from planes was created after the Old West era and before the Jet Age. So apparently, some cowboys must have been circling the desert in propeller planes and shooting at the varmints scurrying around. So much so that they had to make a law against it.

Nowadays, the only things you’ll see shooting out of airplanes over Vegas are the Flying Elvi. 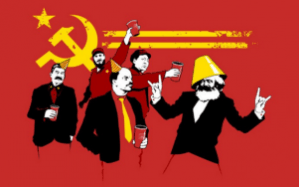 The Nevada gaming authorities take casino employment very seriously. A thorough background check occurs before anyone gets hired at a Las Vegas casino. This is to ensure that applicants have not committed a felony or any crimes involving theft or financial impropriety. With all the money jingling and jangling around in the casinos, they can’t be too careful when hiring.

And BTW: don’t be a communist. During the Big Red Scare of the Cold War days, politicians were seeing red everywhere and feared that Russians were infiltrating America (they still do). So to be on the safe side, Nevada gaming law states that you can’t get a job in a casino if you’re a card-carrying member of the Communist Party.

So there you have it. If you don’t try any of the above things, you’ll have a great time in Las Vegas – or at the very least, you won’t be arrested, fined, or jailed. But if you wake up in the hospital suffering from heart palpitations and hallucinations after a drive-thru Vegas wedding, you’re on your own.