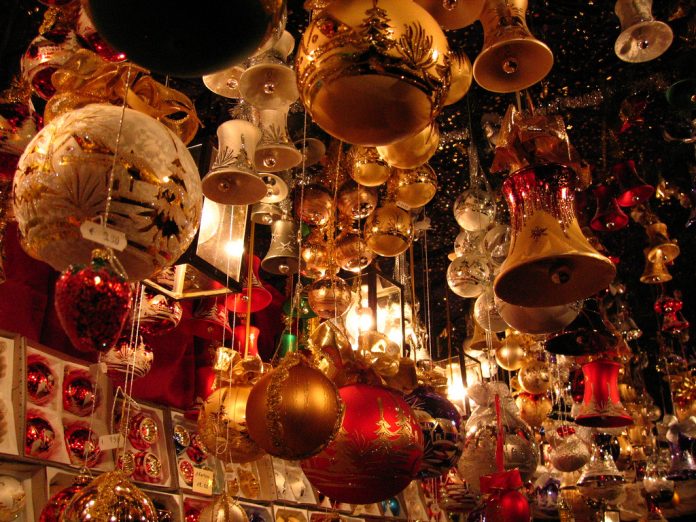 Sleigh bells ring, are you listening? While you may be dreaming of a white Christmas, other cultures celebrate their yuletide joy in the tropical sun, skate to Christmas Mass, or stuff a seal and let it ferment for the months leading up to Christmas. American Santa fills up on milk and cookies left by grateful children, while Irish Santa gets mince pies and Guinness. So whether you wish people a Merry Christmas or a Mele Kalikimaka, the Christmas spirit is in the air all around the world. The following global Christmas celebrations run the gamut from warm and cozy to downright weird. 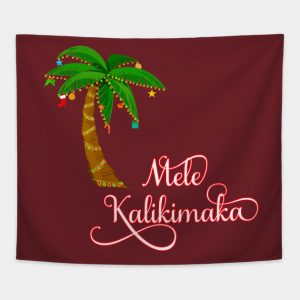 If you live in a tropical climate, a white Christmas is just a pipe dream. Even before Hawaii joined the United States, the locals enjoyed the festive Makahiki season to honor the god Lono. It was a time of peace, rest, feasting, and sharing, which lasted for the months leading up to December.

While wooden tiki idols exist mainly for the tourist resorts nowadays, Hawaii fully embraces the Christmas season of merriment, peace and good will. A luau with a roast pig replaces turkey and ham at the Christmas feast, and don’t be surprised to see locals sporting Santa hats and grass skirts and wishing you Mele Kalikimaka instead of Merry Christmas.

Throw a Christmas Shrimp on the Barbie 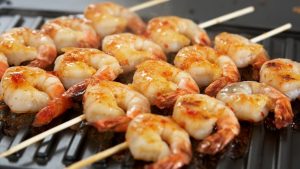 Another group of Christmas revelers who never see a single flake of snow are the Australians, for whom December 25th occurs smack dab in the middle of summer. While there is still a strong Anglo influence at the holiday feast, many Aussies prefer a beach barbecue over a turkey roast, and Christmas carols sing of pudding—with a side of ice cream, please.

And while you’re down at a Christmas beach BBQ, try your hand at building a sandman instead of a snowman. Just add sunglasses instead of lumps of coal for eyes. And Santa? Oh, he makes his appearance all right. But he prefers to wear flip flops over boots, and drinks ice cold beer instead of eggnog.

Yuletide, Snow and a Giant Goat

Many U.S. and UK Christmas traditions are borrowed from Scandinavian countries. We’ve all heard of the yule log, but a yule goat? In Sweden, one town celebrates the festive Christmas season by building a giant straw Julbok (yule goat). Every year since 1966, Gävle, Sweden has erected this decorative straw goat as a Christmas tradition. The Swedes’ pride in building the goat is equaled only in vandals’ enthusiasm for burning it down.

Every year the poor Julbok is in mortal danger of being burnt to a crisp by joyful saboteurs. To be fair, it’s awfully cold in Sweden at Christmas time, so maybe a public goat bonfire is a necessary community service. At least 28 of 45 Julboks have been torched over the years, so place your bets. 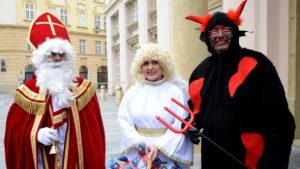 A few Central European countries celebrate the Christmas season with a twist: St. Nicholas, an angel, and a devil roam the streets in early December together, looking for naughty and nice children. In the Czech Republic, St. Nicholas (Svatý Mikuláš) asks children to sing a song or recite a poem. A lady in an angel outfit rewards nice children with treats, while a man in a devil costume threatens to punish naughty children by giving them a lump of coal or a potato.

Especially wicked children face the fear of being kidnapped and carried away in the devil’s burlap sack. In Austria and Bavaria (Germany), the devil character is proudly represented by Krampus, a wicked half goat, half devil, who spreads fear and mischief among naughty children.

The Nativity Scene: Respect and Humor 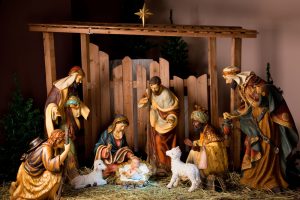 The Nativity Scene is a big part of Christmas for many cultures. Three wise men, Mary, the Baby Jesus, and a manger conjure up images of the magic day of the original Biblical Christmas. Different cultures treat their Nativity Scenes with varying degrees of respect. In the Czech Republic, many a manger was lovingly carved out of wood over the centuries. One of the most elaborate Nativity Scenes in the world is the Třebechovický Proboštův betlém, or Probošt’s Nativity Scene in Třebechovice, near Hradec Kralove. This hand-carved wooden marvel consists of over 2000 figures all set in motion by an electric motor.

Meanwhile, over in Barcelona, the Catalan Christmas takes a rather humorous turn. El caganer, a defecating figurine found doing his business behind the barn which holds the manger, is an integral part of Christmas in Spain—at least in the Catalonia region. The origins of the tradition appear to be either lost in lore or translation. Some say the caganer figurine was a farmer’s tradition. Placing the figure in the Nativity Scene ensured a bountiful harvest, while forgetting the caganer meant risking a poor harvest. Perhaps fertilizer from four-legged animals was in short supply.

Whatever the reason, the caganer is so popular that he has a thousand faces. You can find the original Catalonian caganer, or choose between thousands of celebrity versions. The Queen of England, Barack Obama, Darth Vader, and Yoda have all been immortalized in miniature ceramic celebrity versions of the figure doing his duty, just to name a few.

If you happen to be in Caracas, Venezuela on Christmas Eve, you’ll have to watch out for mobs of rollerbladers on their way to church. The roads are all closed to vehicular traffic so the skaters have an easier time of getting to church. Or maybe everyone skates to church because some damn fool closed all the roads. Either way, this unusual tradition is followed by a Christmas Eve dinner with a Latin flair: Christmas tamales are served. These extra-festive tamales include 3 kinds of meat, dried fruit, herbs, and spices, all rolled into a cornmeal coating and steamed in a corn husk.

Japan doesn’t have a Christmas holiday, but that doesn’t stop Japanese people from celebrating Christmas in their own unusual way. Rather than stringing up colored lights on a tree and stuffing a turkey to roast, they simply order KFC for Christmas dinner. The KFC bucket of Christmas joy is increasingly popular in Japan, so much so that local KFC restaurants take advanced orders on buckets of chicken.

While some countries celebrate the Christmas season in very unusual ways, there’s one thing that remains the same: Christmas invokes a universal spirit of joy, peace, and sharing among cultures all over the world. And that is the real reason for the season.