The origin of gambling is debatable. However, it is believed that at least one form of gambling has been prevalent in almost all societies throughout history. From the Romans and Greeks to Elizabethan England and France during Napoleon’s time, there are several accounts in the history of people playing several types of games of chance. Since gambling was popular in various parts of the world, the games that are played in casinos got their names from different regions. Here is a brief history of gambling and stories behind some of the most popular games in the casinos.

One of the First “Casinos”

The first known gambling house in Europe was the Ridotto. The venue was in Venice and was founded in 1638 by the Great Council of Venice. The gambling house was the precursor to a casino and provided controlled gambling for citizens during carnival season. The Ridotto closed in 1774 because government officials in Venice felt that citizens were spending too much of their money there and becoming impoverished.

Early gambling venues were referred to as saloons in American history. The significance and creation of this establishments was influenced by four major U.S. cities: Chicago, New Orleans, St. Louis, and San Francisco. Travelers came to the saloons to find locals to socialize and drink with. Of course, people gambled in the saloons as well. During the 20th century in the U.S., gambling became illegal and was banned by the social reformers and lawmakers of the time. However, in 1931, gambling was again made legal in Nevada. The first legal casinos in American were in this state. In 1976, New Jersey permitted people to gamble in Atlantic City; the city is now the second largest gambling city in the United States.

More on the History of Casinos

Many people consider casinos to be pretty modern. However, the truth is that gambling has been prevalent in various part of the world for as long as historical records have been kept. Almost every culture and society has a connection with gambling, and games like poker and blackjack have a rich history. Most people usually stick to popular table games to  win a jackpot while gambling live or online, and learning the history of the games could help gamers get a better understanding of how to play.

The History of Casino Card Games 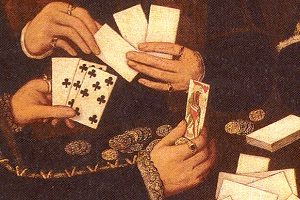 The earliest forms of gambling involved playing with cards. The earliest card games date as far back as the 1100s and were believed to have originated in China. Dice and card games were popular in China thousands of years ago, but historians think the French created the first card deck that gamblers still use today, with suits that are used for blackjack and poker. However, it would be hundreds of years before blackjack was developed in New Orleans in the 19th century. Blackjack was said to have been invented so players could gamble during a short break. In the 19th century, slavery had yet to be abolished in several parts of the U.S., which meant that several people in the New Orleans area were still slave or living in slavelike conditions.

Other cultures played variations of blackjack, but used tokens instead of cards. Some societies still use tokens to play blackjack. Mah-jongg, a Chinese game, uses ornate tokens that are ceramic or made of wood.

Dice Games and the Modern Casino 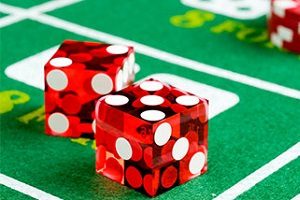 Dice games are even older than card games. Dice were originally used for fortune telling in Egypt and were made from animal bone, which is why it was referred to as bone rolling. Eventually, this became a popular form of entertainment and a type of gambling.

Egypt can claim to be the birthplace of dice; however, modern dice games developed in Korea. The thrill of dice gaming has remained popular over the years, and can today be enjoyed in casinos with games like craps.

The Birth of Slot Machines 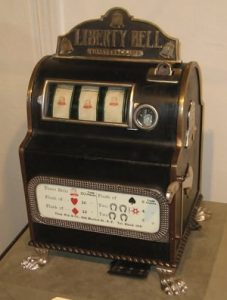 It is also important to note that not all popular casino games come from ancient societies. The first slot machines were developed in California by Charles Fey in the last 1800s. It did not take long for the slot machine to revolutionize gambling, especially for casual gamblers who enjoyed the thrill of spinning to  win a jackpot. Slot machines also contributed to riverboat casinos becoming a popular American pastime, since the riverboats were invented about the same time as slot machines.

Slot machines were also called one-armed bandits. This is because the machines were originally operated by a lever on the side of the machine that is shaped similar to an arm. “Bandit” is another word for thief, and the slot machine had the ability to leave people in debt when they play too many times without winning.

How Roulette Got Its Name

Roulette originated in Europe and was originally named French Roulette. The game was originated in 1655 when Blaise Pascal, a French scientist, created the game as a perpetual motion machine. Roulette means “small wheel” in French.

However, the tradition of using a spinning wheel goes back to Greco-Roman times. Roman soldiers would spin the wheel of a chariot to choose a sinner. The game also involved an arrow that pointed to one of the 10 winning spaces on the ground. The Greeks used a shield instead of a chariot wheel; however, the premise of the game is the same. The shield of the wheel would stop and mark a space against an arrow, and this would be considered the winning space.

How Poker Got Its Name 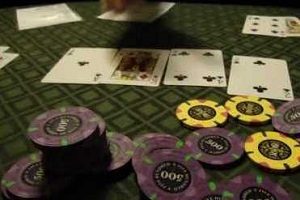 Poker is a popular card game that started in the early 19th century. People do not know for sure how poker got its name, but some believe that the name “poker” comes from the French card game that is called “poque.”

It is also believed that poker comes from a German card game that is called “Pochspiel,” which comes from the German word “pochen.” This is also the origin of the French word “poque.” The word means, “To brag or bluff.” Once the card game was officially named “poker,” some gamblers also referred to the game as “bluff.”

Most historians believe that poker has French origins in terms of where the card game actually got its name. This is largely because poker seems to have become popular and spread to the United States from New Orleans in the early 19th century.

The History of Blackjack

Blackjack is one of the most commonly played casino games. However, people are not quite sure where the game got its name.

When the game “21” was introduced to early gambling venues, casino operators were offered bonus payouts to encourage gamblers to play the game. One of the bonuses was a special, 10-to-1 bonus that the player received if the player’s hand was an ace of spades and a blackjack. The “blackjack” is known as the jack of spades or clubs.

The bonus no longer exists, but the name was given to this combo of cards and eventually became the name for one of the most well known casino card games in the world.

The Impact of Casinos on the World

With the introduction and the revolution of the Web, more gamblers are now becoming interested in casino games. Online games are even attracting people who do not usually gamble in live casinos. Virtual gaming allows people to gamble in the comfort of their own homes. Some casino games can even be played on mobile devices so people can gamble on the go. Many of the games that are normally played at casinos can also be played online, so it is common to find games like blackjack, roulette, and poker through online operators.