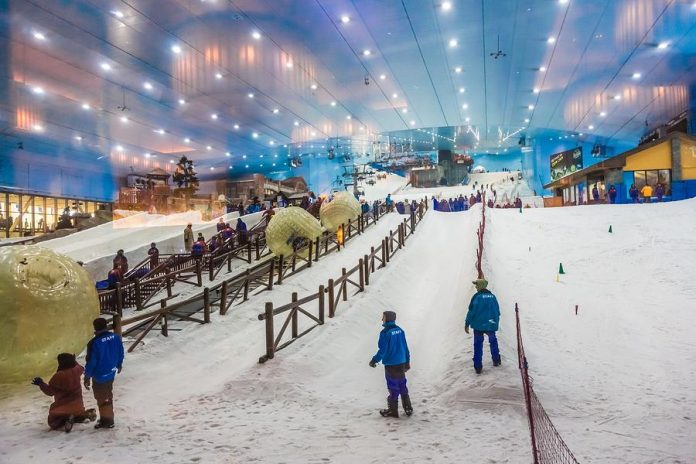 Once they put a professional hockey team in the deserts of Southern California, it was only a matter of time before they invented a full indoor winter experience. And the timing couldn’t be better, what with the global warming and such. If your favorite mountain slope is as dry as a bone this year, fret not. There’s a whole world of indoor skiing destinations awaiting your alpine aspirations. 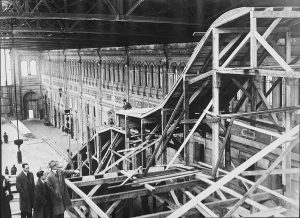 The concept of indoor skiing is older than you might think. In fact, Schneepalast (Snow Palace) was the first indoor ski slope in the world. It was built in an old train station in Vienna, Austria in 1927. The industrious Austrians threw up some sloping wooden scaffolding, covered it with coconut matting, and coated it in artificial snow made from soda.

Visitors to the faux snow slopes reported that the snow was very cold and realistic, until they fell face down in it. Then they could taste the soda. But the Schneepalast had bigger troubles in 1938, when Austria was annexed by Nazi Germany,and such frivolities as indoor skiing fell by the wayside in the face of World War II. The Schneepalast was closed forever. 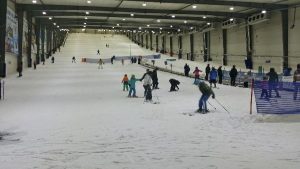 Snowplanet in Auckland, New Zealand is the place to ski whenever there’s no snow in site. Snow machines blow real snow onto the artificial terrain inside the Snowplanet zone, and they change the terrain up regularly to challenge the regulars. The interior of the snow park is kept at a constant -5 Celsius for optimal conditions, and they rent full ski clothing and gear to visitors.

So you can show up in flip flops and shorts, then get kitted out in full ski regalia. And when the sad Kiwis who experience summer in December dream of a white Christmas, they can head on down to Snowplanet for Santa, snow, and a sleigh ride. 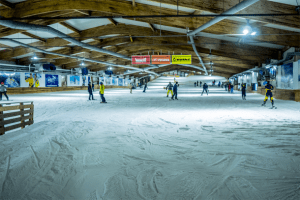 The Alpincenter in Bottrop, Germany boasts the longest indoor ski slope in the world at 640 meters. They also feature indoor skydiving, paintball, and the highest biergarten in the region. Their three hotel partners offer nearby accommodation so you can make a weekend out of tearing up the slopes. Beginners can enjoy an easy slope with a minor incline, while advance skiers can twist and slide on a 24% gradient slope. They even organize corporate events and bachelor parties. Bottrop is located in the Ruhr region of Western Germany, north of Düsseldorf and West of Dortmund. 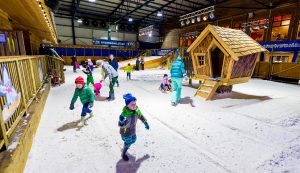 If you fancy some indoor skiing whilst in Britain, pop over to the Staffordshire region and pop into the SnowDome in Tamworth, North of Birmingham. The main slope at SnowDome is 170 meters long, and offers fun for the whole family. You don’t have to worry about teens hopped up on energy drinks flipping upside-down snowboards like helicopter blades overhead. This is more of a winter fun center than a competitive winter sports zone. They’ve got skiing, sledding, ice skating, and even a swimming pool for some less frigid fun. There’s even a fitness and spa complex to buff out and soak your bod. 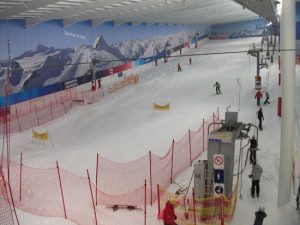 Another UK indoor ski zone is the Snow Centre, located just north of London in Hemel, Hempstead, Hertfordshire (which admittedly is a helluva lot of haitches). The Snow Centre offers a wide variety of snowy activities for the whole family, so there’s plenty of skiing, boarding, tubing, and sledging for everyone. They also offer lessons for all levels of skier and snowboarder, from newbie to shredder. Snow machines produce snow all year round, and there’s also a bashing machine which breaks up old, packed snow, and keeps it well-groomed for everyday use. 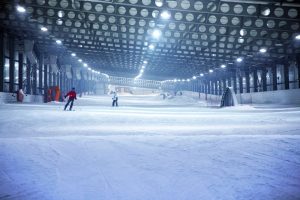 Featuring a 24-inch base of faux snow, Snowhall in France keeps the winter ski spirit alive all year round. In fact, the French national ski team trains there in the summer mornings, so expect some fast action if you opt for slushing down their slope when they’re not there. At 620 meters long, the slope is the second longest in Europe after Alpincenter. Warm up in a forest-themed restaurant bar, which features a large window with a view of the slopes. Amnéville is located in Northern France, very close to Belgium, Luxembourg, and Germany. The region is known for its wide variety of leisure activities, including a park with mineral pools, an aquarium, and a zoo. 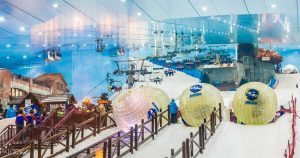 When you think of the Middle East, you naturally think of skiing, right? The Mall of the Emirates is rapidly becoming as extreme as Las Vegas in its extravagant entertainment experiences. If you can buy it, it’s on sale at the Mall of the Emirates. Including lift tickets and ski rentals at the only indoor ski slope in the Middle East. Ski Dubai offers a 3,000 square meter snow park complete with a snow cavern. It also features a Freestyle Zone for experienced snowboarders, full equipment rental and lessons, and real live snow penguins waddling around on the faux snow. So when the desert heat of the Middle East is too much, this snowy oasis in the sand is the perfect place to cool off.

The highest concentration of indoor ski slopes is located in the Netherlands. Considering that indoor ski slopes are few and far between, a country with three of them certainly has cause to celebrate. The SnowWorld resort offers two locations, one in Landgraaf, and the other in Zoetermeer. The Landgraaf location sports five slopes, four restaurants and a hotel in what is billed as the largest indoor ski village in Europe. The Zoetermeer SnowWorld, however, boasts the “Steepest indoor slope of Europe.” The Landgraaf resort also has the largest climbing park in Europe, with 1000-meter ziplines. After zipping around, relax in a chalet with some food and drink. Both SnowWorld locations have specials featuring packages with skiing, fondue, and schnitzel included.

The third ski location in the Netherlands is called Montana Snowcenter. Not to be confused with the U.S. state of the same name, Montana is 100% Dutch. To brag as well as the other Dutch resorts, Montana Snowcenter claims its own superlative: the most energy-efficient ski hall in the Netherlands, with 5000 meters of solar panels employed in the resort. So all of that sun turns into all of that snow. That’s all well and nice, but can you get fondue?

The First Indoor Slopes in the U.S.A.

Surprisingly, the first indoor ski slopes in America are NOT located on the Las Vegas Strip inside one of its money mausoleums. Billed as the first indoor ski and snowboard park in the Western Hemisphere, Big SNOW America doesn’t want any confusion. This man-made deep freeze can be found in only one of the Americas, and that is the one that includes New Jersey. That’s right, New Jersey. The same Garden State that gave us Atlantic City, Chris Christie, and the Sopranos. Big SNOW will open in March, 2019 in the modern entertainment hippodrome known as American Dream Meadowlands, in East Rutherford, NJ.

For those not into skiing or boarding, Big SNOW promises lots of other opportunities to play in and around the winter wonderland. They have an ice climbing wall and guided mountaineering tours. Of course there will also be lessons for those interested in mastering the ice crystal arts. There’s even a new way to learn to ski or snowboard, called the Terrain Based Learning method. Specially designed courses, slopes and obstacles aid students in mastering the basic moves for each type of skiing situation, from cross-country skiing to downhill slalom courses.

So now you have the dope on the slopes, at least the ones operating 365. Whether you’re carving on two planks or kicking the jibs on trays, you’ll always be able to go waist deep in some killer powder in all seasons, all year round.