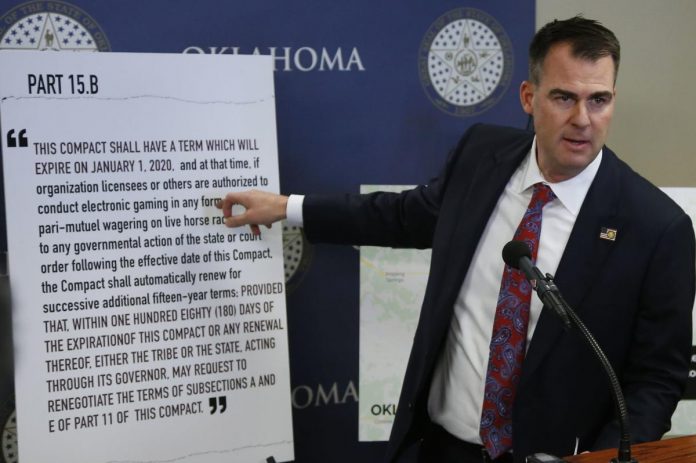 The Cherokee, Chickasaw, and Choctaw nations of Oklahoma are taking Governor Kevin Stitt to federal court to resolve a dispute over their tribal gaming compact. The newly elected governor claims that their tribal-state gaming compacts will expire on January 1, 2020, rendering the tribal casinos illegal. The tribes had expected their compacts to automatically renew for another 15 years.

The main sticking point of the tribal-state casino issue is over the Governor’s contract terms. Gov. Stitt is taking advantage of the tribal compact expiration to renegotiate the terms of the contract – in favor of the 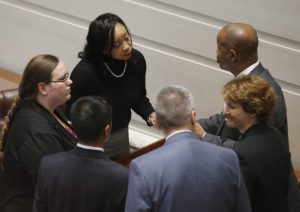 However, the new terms of the tribal-state casino compact were rejected by all 3 tribes, resulting in a lawsuit. The tribes currently pay between 4% and 10% of net casino revenues to the state to guarantee exclusivity, meaning that non-tribal casinos cannot muscle in on their turf. These tribal casino taxes amounted to $139 million in payments to the state last year.

The tribes are not against renegotiation of higher fees. The leaders of the 3 largest tribes have all made statements to this effect; however, they fear the contracts will not automatically renew, leaving them vulnerable.

In a statement by Matthew L. Morgan, chairman of the Oklahoma Indian Gaming Association, he clarified the legal claims of the tribes:

“The Tribes remain firmly united on the automatic renewal of the compacts,” Morgan said. “We have communicated our position to Governor Stitt on numerous occasions in hopes of finding a practical path forward benefitting both the State and Tribes.”

Meanwhile, negotiations came to a close, leaving tribal leaders no choice but to involve the federal government, the ultimate authority in all things tribal. The Bureau of Indian Affairs, a sub-section of the Dept. of the Interior, handles tribal recognition and reservation land distribution. Individual states must negotiate the terms of tribal casinos via tribal-state compacts, which stipulate the terms, taxes, and conditions of operating Indian casinos within the state.

Oklahoma approved tribal casinos in 2004, and the Cherokee, Chickasaw, and Choctaw nations signed their tribal-state gaming compacts in 2006. The terms of the contract clearly state that the compact automatically renews after the 15-year term expires, but Gov. Stitt has tried to change the conditions.

After tribal gaming was approved, over 130 tribal casinos sprung up all over Oklahoma, making it one of the most lucrative tribal casino states in the U.S. Most of the larger casino-resorts lie near the state line bordering Texas, where they draw huge amounts of gambling revenue from visitors. The largest of these mega-resort casinos, WinStar World Casino, operated by the Chickasaw Nation, is the largest casino in the U.S. by gaming floor size (600,000 sq. ft.).

There are 39 federally recognized tribes in Oklahoma, but not all of them operate casinos. Tribal gaming in Oklahoma generated nearly $2.3 billion in revenue in 2018, and $139 million in taxes went toward education.