Tesla’s latest update to its Autopilot software will feature several playable Atari video games. The v9.0 update will include classic Atari games, such as Missile Command, Pole Position, and Tempest. The steering wheels control the games, but they will only work when the car is not moving. Tesla CEO Elon Musk made the announcement via Twitter on Wednesday, giving the release date as “in about four weeks.”

Musk was responding to a Tesla customer when he made the announcement. The happy Model 3 owner was praising the electric car. Another person asked him in the same thread about the changes the v9.0 would bring to Model S and X. That’s when he revealed the upgrade would include video games and other changes.

His Twitter response read: “Games & other refinements will go to all Tesla S, X & 3 from the start of production. Autopilot enhancements apply to all Model 3’s plus S & X made in last few years (needs Autopilot Hardware V2.0 or higher).”

In June, Musk had announced the v9.0 would include all the self-driving features needed to make Tesla vehicles autonomous. On other occasions, he had tweeted about the possibility of including an option to play video games. Just before Wednesday’s earnings call, Musk invited interested game developers to apply for a position in Tesla.

Wednesday’s earnings call revealed that Tesla once again lost money. In this quarter, it was $740 million. However, Musk pointed out that there was growth in the company’s numbers and that it was the last unprofitable quarter. This resulted in a significant rise in the company’s stock in the following days. 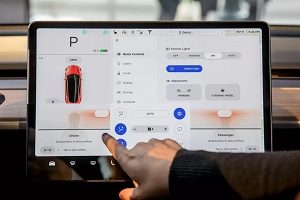 Besides Atari video games, Autopilot v9.0 will include the following features:

The much-talked-about feature that didn’t make it

Musk had announced back in June that the latest version of Autopilot will have advanced features, such as Navigate on Autopilot, Mad Max Mode, and Path Planning. For some reason, the company shelved this feature. However, the company may include it in future versions.

Navigate on Autopilot is a guidance system feature that lets Autopilot find the most efficient route. It then guides the vehicle safely to the destination. When a driver activates the feature, the Autopilot suggests its own lane change when it feels it is necessary. This can significantly reduce drive time and also help you make better decisions.

To activate Navigate on Autopilot, the driver needs to enter a destination, which appears on the screen if it’s available. Once activated, blue steering wheels, called Autosteer logos, appear on the screen. These logos represent the segments of the trip in which the feature is available. At the same time, you will see the current path of your vehicle represented by a blue line. This makes it easier for you to plan your path.

Absent feature was a step toward autonomous vehicle

Sadly, this feature didn’t make it into the Autopilot v9.0. The reason Musk gave was the company needs to validate the operational features using a Shadow Mode.

As mentioned earlier, the video games included in Autopilot v9.0 are Missile Command, Pole Position, and Tempest. Let’s check out some of these games.

In case you are wondering whether these old games will be interesting, they will come in their latest versions. These games will come in handy when you are waiting for someone and have nothing better to do. They will help you pass the time and chase away the boredom associated with waiting.