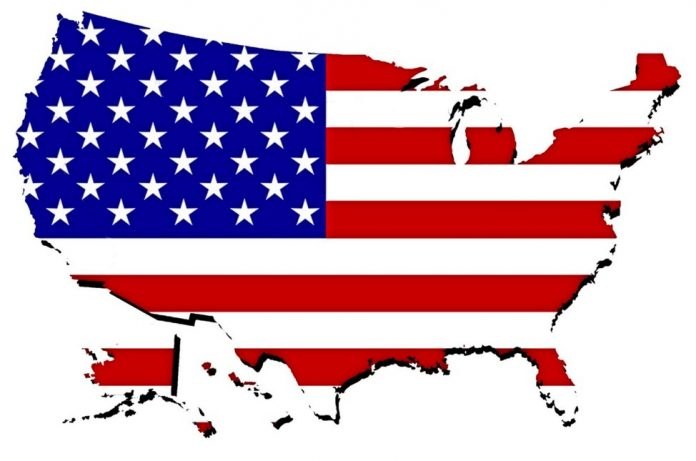 Online gambling legislation in United States of America is always a hot topic of discussion. Federal law does not proscribe playing online casino games; it focuses on payment processing options. This distinction is important in that it governs all the activity pertaining to online gambling legislation from one state to the next. 22 years ago, global online gambling raked in an estimated $200 million. Nowadays, that figure numbers in the billions. Prosecution of online gambling activity across the United States is rare, but certainly possible. Consider the case of Jeffrey Trauman, of North Dakota, who was arraigned and charged in 2003 and required to pay a $500 fine for having generated $100,000 worth of winnings from sports betting online.

There have been multiple cases since then, but the overall number remains low. This highly contentious topic has gained notoriety over the years, given several obscure laws which hover above the gaming arena. One of these is the Unlawful Internet Gambling Enforcement Act (UIGEA) of 2006. The name of this law suggests that it is unlawful to gamble online, but that’s not what the law states. In fact, the thrust of the UIGEA is targeted against wire transfers being accepted in illegal online gambling activity. The UIGEA was an addendum to the SAFE Port Act, but many libertarians and responsible gaming proponents do not deem the UIGEA as an essential piece of legislation. Owing to the complexities that existed when making payments to online gambling platforms, many operators took their activities offshore thereby allowing US players to use payment processing companies to make deposits and withdrawals without infringing upon US law. Payment processors like Skrill, NETELLER, PayPal, MuchBetter, ecoPayz, iDEAL, EPS and dozens of others have emerged over the years to make it possible for legal-age players in the US to deposit funds into their online casino accounts without directly using credit cards, debit cards or bank accounts.

Problems with US Online Gambling Legislation & the Changes Taking Place

Despite the UIGEA, the SAFE Port Act, and the Federal Wire Act of 1961, many

online gambling businesses continued to offer their services to US-based players. However, Black Friday put paid to that. It was April 15, 2011 when the US Department of Justice decided to bring criminal charges against the world’s premier online poker companies who were operating in the United States at the time. The case in question was the United States versus Scheinberg. The ramifications of that fateful day were unprecedented, not only for online poker but for all forms of online gambling. PokerStars and its founder, Isaiah Scheinberg became the black sheep of the online gambling world, alongside Absolute Poker, and Full Tilt Poker. These operators abruptly abandoned the US market and became persona non grata.

As is so often the case with online gambling legislation, things were about to change in a big way once again. Within a year, PokerStars bought out Full Tilt Poker, all charges were dismissed and no wrongdoing was admitted. However, the indictment against the individuals running the companies remained. From an online poker perspective, Black Friday was the death-knell for the industry. It has struggled ever since. By 2013, the online casino landscape was about to blossom. New Jersey and its then Republican governor, Chris Christie was first to pounce on the US Justice Department ruling that the Federal Wire Act only applies to sports betting. On February 26, 2013, New Jersey legislators approved a bill for online gambling which was signed into law by Chris Christie. The 11 casinos operating in Atlantic City at the time were the only designated casinos able to offer online gaming platforms.

Other states were soon to follow New Jersey’s example, including Delaware and Nevada. It is worth pointing out that gambling activity in Nevada is limited to online poker – not online casino. As the bastion of land-based casino games in the United States, the state of Nevada has not given a green light to online casino activity and is unlikely to do so as long as lobbyists like Sheldon Adelson are vehemently opposed to online casinos. In Delaware, online casino and online poker were greenlighted. From 2013 through 2019, the New Jersey market blossomed to epic proportions. By mid-December 2018, the New Jersey online casino market was inching towards revenues since inception of almost $1 billion. New Jersey’s land-based casinos which run online casinos in the Garden State include Golden Nugget, Resorts, Borgata, Caesar’s, Ocean Resort, Hard Rock, and Tropicana.

Justice Alito issued a scathing rebuke in his ruling, ‘… It is as if federal officers were installed in state legislative chambers and were armed with the authority to stop legislators from voting on any offending proposals… A more direct affront to state sovereignty is not easy to imagine.’ Once again, New Jersey was ahead of the curve and had legislation ready to go. New Jersey successfully petitioned SCOTUS, arguing that the Feds were commandeering states to maintain strict controls on sports betting activity. Fortunately for the pro-gambling sector, the Supreme Court adopted a hands-off approach and allowed states to determine for themselves what to do. 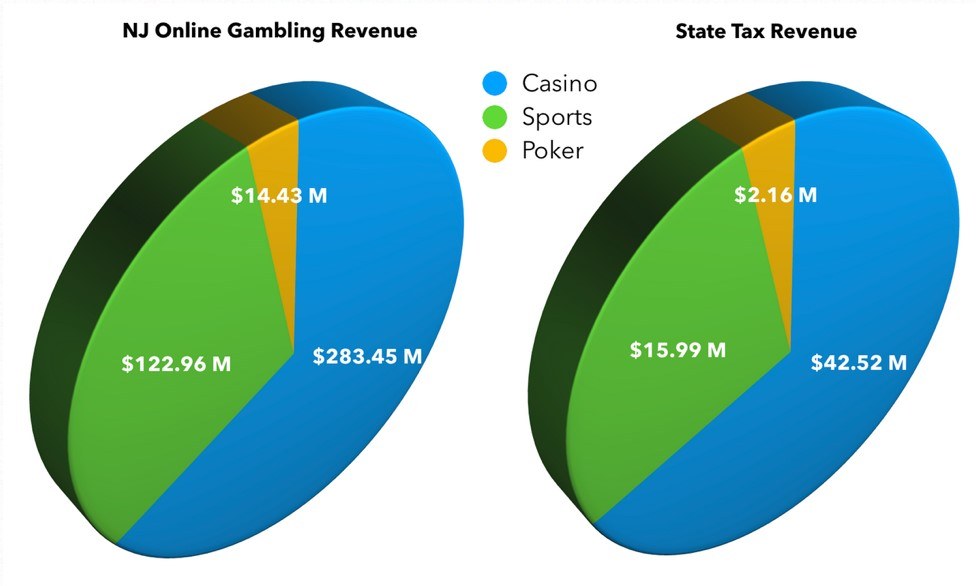 The 2019 breakdown (pictured above) indicates online casino revenues of $283.45 million, online poker revenues of $14.43 million, and online sports betting revenues of $122.96 million. From that, State tax revenues from online casino activity amounted to $42.52 million, $15.99 million from sports betting, and $2.16 million from online poker. For the most part, online gambling is patently illegal across most of the United States. It has an ambiguous status in multiple states including California, Nevada (only online poker is legal), North Dakota, Missouri, Ohio, Alabama, Ohio, and South Carolina. Online gambling is not illegal, and considered probably legal or quite legal in multiple states including Minnesota, Kentucky, New York, Pennsylvania, Maine, Rhode Island, Delaware, and New Jersey (Data Sourced from Wizard of Odds).

Regardless of the status of online gambling, many US-based players actively participate in this pastime even if it is with foreign-based operators. From a legal perspective, USA legal online casinos operate according to a strict framework. Geolocation-based software prevents anyone outside of New Jersey from real-money play at any NJ DGE-licensed online casino. All these operators run a tight ship and actively enforce the geolocation block on anyone outside of their state, or outside of the intrastate online gambling compacts.

It is important to point out that the status of online gambling legislation is always changing. Proposals are being drafted, even as we speak in states across the nation. Even states which reject online gaming may well be considering bills to regulate online poker, online casino, or online sports betting accordingly. After the US Supreme Court lifted the federal ban on sports betting, 11 states have implemented legal sports gambling activity. Many casino operators are pinning their hopes on regulated sports betting to open the doors for online casino gaming, online poker and other forms of online gambling. 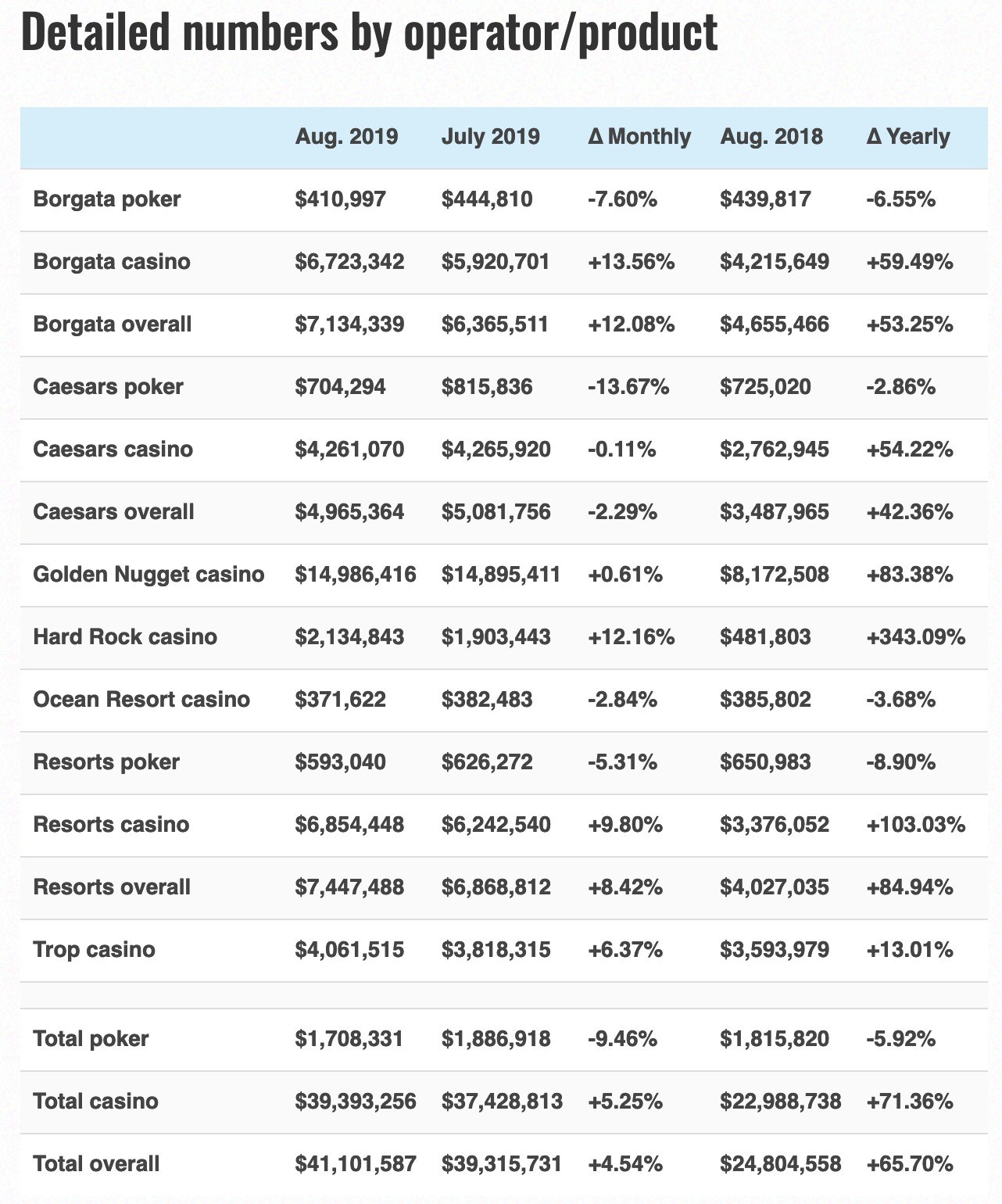 The Elephant in the Room: What About the Reversal from The US Justice Department? 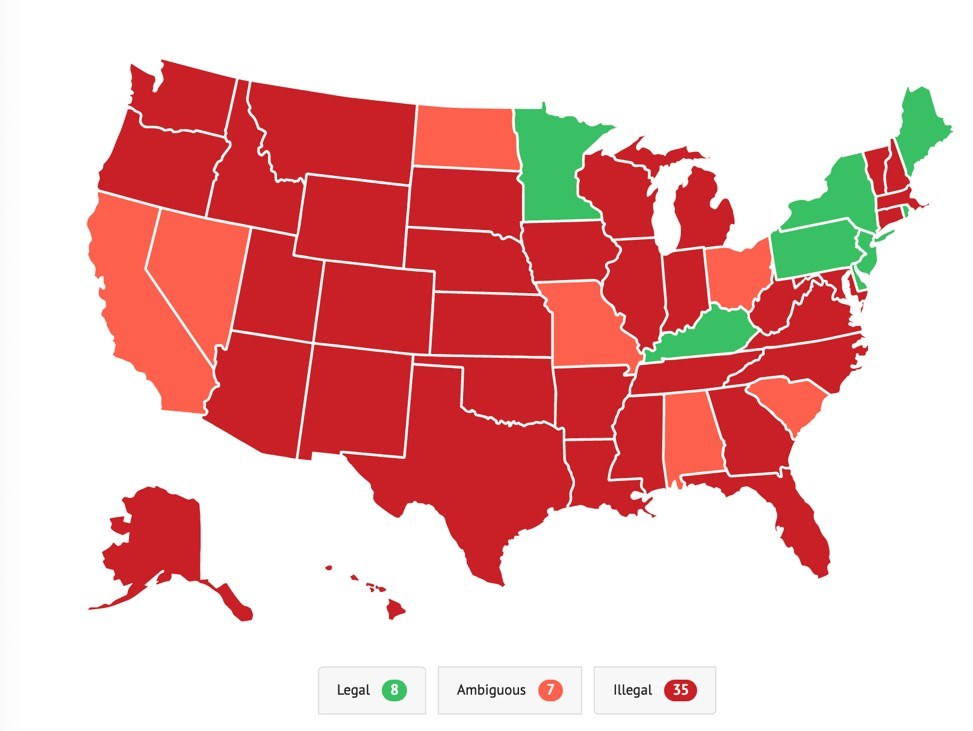 Source: Real Money Action State of Online Gambling Across the US

In January 2019, the US Justice Department issued a legal opinion on online gambling. The 23-page report is an interpretation of the Federal Wire Act. It indicates, in no uncertain terms that any form of gambling across state lines is prohibited. This legal opinion stands in stark contrast to the 2011 US Justice Department opinion under the Obama administration. That opinion stated that intrastate online gambling (online casino, online poker, online bingo, online lotteries) is legal provided no online sports betting is taking place.

Now, the Department of Justice and the Trump administration has reversed course and created plenty of confusion among operators, players, and statewide regulators. The US DOJ decision is unsettling to say the least. With all forms of online gambling activities involving interstate transactions now banned, many industries could feel the heat. These include fantasy sports leagues, lottery, online casino, online poker, and sports betting. A caveat is in order however: This US DOJ reversal only applies to transactions taking place between states, not within an individual state alone.

Final word: The legalese of the online gambling regulation debate is difficult to follow, even for an astute scholar. For online casino players, there is a lot less to worry about. No legislation currently exists which sanctions players for participating in online casino games. Granted, federal law does not take kindly to payment processors transferring funds to and from online gambling sites, but state-wide legislators have taken it upon themselves to grant that authority especially where online casino gambling is legal. The laws are always changing – that much is true. It is worth checking out current legislation at state level for added peace of mind.

Many states which have a zero-tolerance policy towards online gambling are actually crafting legislation to permit regulated gambling activity. The ever-changing landscape is sure to bring many more states into the fold, as the increased liberalization of the online gaming industry continues to unfold. The Obama administration and the US DOJ opinion at the time reversed course and deemed the Federal Wire Act irrelevant to online casino gaming. That has changed now, but appeals courts are likely to be inundated with requests to prevent this latest legal opinion from being enforced.