Virtual reality first appeared on the scene in the 1990s. However, it only began to make a major impact after it reappeared in 2015. That year, headsets, such as Samsung’s Gear VR and Google’s Cardboard, entered the market with a bang. These products elicited much excitement from not only investors but also consumers. Since then, virtual reality has also made an impact in various industries, one of which is the sports industry.

The Advantage of VR In Sports

In the real world, athletes must be able to deal with all the factors around them, especially on game day. They cannot rely on virtual reality for this because some of those factors are nonexistent. Examples of this would be the weather, the actual performances of other players, and a player’s morale.

VR technology makes it possible for athletes to get in the zone both mentally, physically, and emotionally as they train. It allows athletes to build up their confidence. They will make progress in their training and see themselves improve on the playing field. An increased level of confidence is crucial when playing in a game. Athletes believe they can perform at a greater level if they feel they are more familiar with their environments.

Virtual reality allows experienced professional athletes and sportspeople, both young and old, to double up on their training. It can also help injured athletes through their recovery process, so they can return to the game. The technology does this by offering unlimited access to a variety of courses and fields. An athlete can train without the risk of reinjuring himself or herself. The athlete also doesn’t physically need to be on the field where he or she would usually train.

How Has VR Been Used in The Development of Professional Athletes and Sportspeople?

Applying virtual reality technology to the sports industry has led to athletes and sportspeople improving their performances. VR has made it unnecessary for a golfer to head to the golf course to work on improving his or her swing. A basketball player does not have to go to the court several times to work on his or her shooting.

Virtual reality has made several things possible in the sports industry. Athletes clock better times and see the game better. They also can anticipate the moves of their opponents. And, what makes it great is they can do this while in their homes or training areas.

Some of the ways virtual reality has been used in the development of the sporting industry include:

For decades, professional teams have been using films to assess their performance on the field. However, films offer a vantage point assessment that is very different from what a player actually experiences during a game. As such, its results are rarely optimal.

With virtual reality, players and coaches are able to train better by repeatedly watching and experiencing a game. Some virtual reality training videos are from the players’ point of view. This allows players to experience the reality of a game that they may come across on the field or course.

Teams can prepare their players for a game without them having to be on the field for an extended period. While they’re on the field, they could not only suffer injuries but could also find themselves exposed to the elements. Teams are also able to perform optimally through continuous training. And, the training does not conflict with the rules set by the various governing bodies on outdoor practice.

How VR Succeeds as A Training Tool 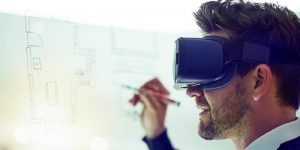 VR succeeds as a training tool by repeatedly immersing an athlete in a game. Virtual reality provides a 360-degree experience. And, that convinces the player’s brain that he or she is actually experiencing the game. As a result, the brain and the body act in unison to react to the scenario more quickly. And, in that way, the athlete is better prepared to deal with a similar situation in the real world.

A player is also able to train by watching 2-D films. However, the immersive aspect of a 2-D film amplifies the session in a way that isn’t possible with a film. It has been scientifically proven that total immersion into virtual reality leads to players remembering the training topics better. They also experience a boost in their performance. In addition, they engage better with the training and learning materials.

In a similar way that coaches use virtual reality to train athletes, they are also able to use the technology to look for potential players.

Coaches use virtual reality to observe an athlete’s performance in a game simulation. VR has allowed professional scouting agents to take their profession to a higher level with the least amount of work. In time, it may even lead to the elimination of scouting agents on the field altogether. They will be able to assess the players from the comfort of their own offices.

How Technology Will Affect the Future of Professional Sports

Virtual reality has not yet manifested its full potential within the sporting industry. One of the ways that professional teams can use it is in the recruitment of players. It can make the whole process easier by attracting recruits to the campuses and make them seem closer. Recruits will be able to visit the campuses, walk through the dorm rooms, stadiums, locker rooms, and meet fellow recruits. They can meet the athletes who may become their future teammates through virtual reality. They can do all this without leaving their homes or getting on a plane.

Virtual reality could also lead to the emergence of new sports. This technology, as well as similar technology, such as augmented and mixed reality, would be the basis for these sports. eSports have been in the industry for some time. However, many do not consider it to be a sport. There have been some eSports that have integrated physical exercise with gaming aspects. It’s only a matter of time before AR/VR integrated sports transform into fully professional sports.

It will be an overstatement to say that virtual reality will soon overtake the real-life experience of any situation. However, there is no question that the technology has completely transformed the sporting industry.