The Big 10 isn’t as successful as everyone had hoped it would be. Despite that, the conference is in the spotlight this week. By far, the biggest game in the Big 10 this week is the Ohio State-Penn State game Saturday. This game is the most interesting in terms of the National Championship picture and the Big 10 Championship. The team that wins this game will most likely win a shot at the conference championship game. 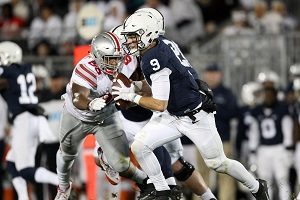 The tea leaves are difficult to read for this game. The Buckeyes are the only team in the nation in the top five playing on the road this week. In addition, Meyer is coming off a suspension for failing to report one of his assistant coaches for domestic violence. The Nittany Lions have had their share of scandals as well. There was a sexual abuse scandal a few years ago. However, both teams appear to be on the upswing on both offense and defense. Both survived scares from underrated and possibly overlooked opponents. The offensive lines for both teams are firing on all four cylinders, with balanced passing and running attacks.

Both team’s defense lines appear strong as well. However, the Buckeyes are 7-2 in their last nine road games, including a 7-0 current streak after a 0-2 streak. This fact is a little better than Penn State’s streak in its last six games against Ohio State. The team is at 1-5 against the spread. This one is too close to call. The current thinking is that Ohio State will most likely win, but will not beat the spread.

Northwestern has had better seasons, but this isn’t one of them. The Wildcats opened the season with a win, but then they lost to Duke and Akron. And, they looked bad doing it. One of the major reasons for the team’s downfall has been its offense. Injuries have deflated the spirit of the team. One injury ended the career of the team’s leading rusher and nationally ranked juggernaut. The defense, while not losing as many players to injury as the offense, nevertheless, looked lackluster at best.

However, the Michigan Wolverines have lost three of their last four road games. That is not a good indication that they will win this one. But, the offense is playing better than it did at the beginning of the season. And, the defense is giving up 14 points per game. Michigan should be able to cover the spread easily, even with its penchant for losing road games. The team is simply better than Northwestern is right now.

Cornhusker fans are currently looking back fondly to the glory days of Nebraska football. There was a time when the team could manage to win every home game it had. That was a few years ago, and Coach Frost promised the Husker fans this season was going to be bad. He wasn’t kidding. The Nebraska Cornhuskers are sitting at 0-3 for the first time since the end of World War II. Michigan whipped them. There appears to be no help for the Cornhuskers this year – their offense is awful, and their defense is worse.

Purdue, on the other hand, appears to be on the upswing. The offense is beginning to gel under its quarterback, and the team’s defense has shown flashes of brilliance The team turned in a decent performance versus Missouri and a brilliant performance against Boston College.

In the series, Nebraska is 4-2, but the team is 4-1 against Purdue since it joined the Big 10. Purdue is 0-2 in Lincoln. Interestingly enough, Purdue is the only team Nebraska has beaten in its last 10 games. Take Purdue to cover the spread.