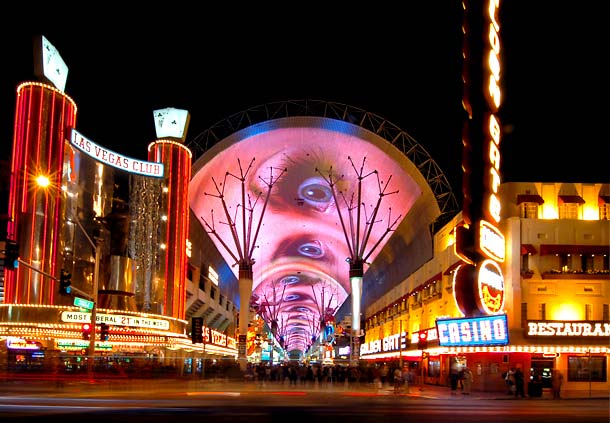 The video canopy will be focus of the renovation 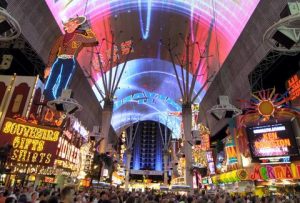 Up for a renovation is the 90-foot wide and 1,500-foot-long video canopy that is one of the main attractions of Las Vegas’ downtown. The video screen, which is suspended 90 feet above the street, is a major city landmark. Approximately $9.5 million has been set aside for its renovation. The last time it was renovated was 14 years ago. Updating the LED lights of the video canopy, which number 12.5 million, will make a huge difference in the quality of the video display, said Patrick Hughes, Fremont Street Experience CEO.

LVCVA’s plan is to increase the number of LED lights by as many as four times, making the screen seven times brighter than it is now. The increased pixel density will enable shows to be run day and night, Hughes added.

The plan also includes installing solar panels on top of the canopy so 100 percent of the electric power will be provided by renewable energy. Hughes said the city is working on ideas for solar panels because it will subsidize electricity and because it’s the way of the future.

One more part of the canopy revamp is a smartphone app called “The Key.” This app will allow visitors to post messages that will be displayed on the canopy and allow them to vote on the music they want to have played. Before displaying the messages, they will be screened by Fremont Street Experience staff.

According to Mayor Carolyn Goodman, the initial plan is to give people the ability to interact with the attraction via their smartphones. She said it’s going to be so unique it is sure to bring a lot of visitors to the Las Vegas downtown.

Hughes said people who install the app on their smartphones will be able to view what is playing on the canopy from anywhere in the world, helping create a connection that will make people want to keep coming back to Las Vegas. He added the city is looking to convert the one-dimensional screen into a floor-to-ceiling interactive experience that will distinguish the city from other cities in the world.

The $30 million needed for the project will be split three ways — between the city, LVCVA, and Fremont Street Experience. The renovation project is expected to be completed in 14 months.

Downtown Las Vegas has gone through many changes 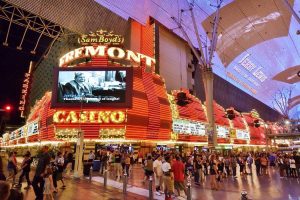 The proposed renovation comes on the heels of the changes the Fremont Street, and downtown Las Vegas, in general, has gone through in years. For a long time before that, it was like the Las Vegas Strip’s poorer older brother who had fallen on hard times. But, the inflo of investments in nongaming amenities and entertainment in recent years have brought a sea of change to the area.

One of the area’s new main attractions is the Fear the Walking Dead Survival experience, which opened last summer. Based on the popular TV show, it recreates the post-apocalypse world populated by zombies – using motion rides, video gaming, and real actors – for those brave enough to go through the experience.

D Casino is also working on a new casino project on Fremont Street. The casino is expected to add some of the glitter generally associated with The Strip to the area these days.

The proposed Fremont Street Experience renovation is certain to put the areas back on the must-see list of visitors once again.