Research has estimated more than half the adult population in the United States has played slot machines at some point. Slot machines represent a form of entertainment for many people, whether they are at a race track or a casino. In addition, you can find video gaming terminals in bars and restaurants in many states. Everyone who has played a slot machine has dreamed of getting the top prize. The reality is, however, if the slot machine breaks, you will not receive a prize.

The Basics of Slot Machines

Slot machines first appeared in the late 19th century as automated machines. They would pay out money in combinations when a person put money into a coin slot. The earliest slot machine, The Liberty Bell, had three reels. The Liberty Bell had a payout of 10 nickels for the investment of a nickel. The success of the first slot machine led to additional mechanical gaming devices. Slot machines continued to advance in technology. There are fully automated and some contain video game graphics. Instead of pulling a lever, patrons can now push a button to play the machine. Slot machine prices range from a penny to slot machines that require more than $100 a spin. Progressive jackpots can cost thousands of dollars per spin, but the payouts can be much larger. The largest jackpot on a slot machine was $40 million on one spin.

Slot machines work by using revolving reels. An algorithm determines the winning payouts. Slot machines can have three, five, seven, 12 or 15 reels. Slot machines are some of the highest odds at a casino. For example, a slot machine has 256 possible stopping points per reel. A player could put in a dollar and expect to win once every 16 million plays. Progressive slot machine odds are even higher than regular slot machines. In addition, depending on the slot machines, players can use the additional money to increase their chances of winning.

When the Slots Go Down 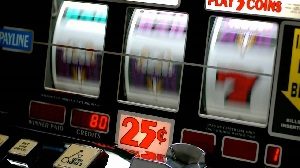 When slot machines make an error, or “go down,” it is usually in your favor. This means when slot machines fail, the player usually thinks he or she has won a lot of money. Usually, a programming error makes the machine display a large pot. Modern slot machines use random number generators to decide who gets money when there is an error. In one case, an error with the decimal number on a slot made a player think she’d won $42 million. This would have been the largest jackpot in history. However, in reality, the player had won far less than that. Because of the slot machine error, the casino offered her a free steak dinner, but no jackpot.

A similar incident happened on a different machine. The player did win on the machine. Instead of spitting out $210, which is what she actually should have won, it told her she won $8.6 million. On the machine she was playing, however, the most she could have won was $6,000 for the line she played. At least, in her case, the casino did give her the $210 she actually won.

When playing the slot machines, it is always best to remember this. If the machine malfunctions, it is the casino’s right to say that any money it owes the gamer is void. Some casinos will pay out anyway. However, the rule of the slot machines in casinos is that any slot is in favor of the house. That means that the chances you’ll get your payment are slim to none.