When the federal government first began to make noise about the Federal Wire Act, most people didn’t take much notice. The law itself was considered to be archaic. However, the federal government recently decided to threaten prosecutions and gave states 90 days to comply. Some states have said they plan to sue.

New Hampshire has several options available for visitors and residents. The Granite State has dog racing and horse racing. It also allows pari-mutuel betting. While the state does not have commercial casinos, there are tribal casinos. Also, the state allows ships with gambling machines to cruise the waters for 48 hours at a stretch. Bingo parlors and other charitable games have also been very popular. There are small gambling machines in gas stations and convenience stores. They pay out small prizes and gift cards rather than cash.

The Wire Act and the Problem

The U.S. government passed the Federal Wire Act in 1961 as a way to fight crimes that involved the mafia. It says if an entity uses money that comes through a wire to place a bet, it is illegal. It is also illegal to make payoffs for bets or wagers via the wire. In fact, any information transmitted by wire that involves gambling is illegal, according to the act.

The Federal Wire Act was a necessary law in the early 1960s. Back then, many businesses did bank transactions via the wire. However, nowadays, many consider the law to be outdated. Today, many business transactions, even those involving large sums of money, happen over the Internet. Also, the Wire Act makes no provision for cryptocurrency transactions. 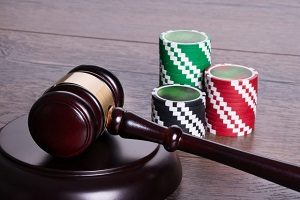 In 2011, the states pressured the U.S. Justice Department to rule on online gambling transactions occurring over the Internet. It finally decided that unless the transactions were for sports bets, they were not illegal. States, including New Hampshire, began to design platforms for online casino and lottery betting.

In May 2018, everything changed, however. The U.S. Supreme Court ruled states could decide for themselves whether to allow sports betting. It ruled states had the power to regulate their own commerce. This meant the federal government could not regulate gambling in the states.

In November 2018, the U.S. Justice Department reversed its 2011 ruling. It said the Federal Wire Act covered all transactions involving gambling, not just those involving sports gambling. Faced with an immediate outcry, in January, the government said it would give states 90 days to comply.

New Jersey issued a letter demanding that there be a review of the process. New Hampshire, on the other hand, didn’t wait. On Feb. 15, the New Hampshire Lottery Commission filed a lawsuit in federal court. The state said the federal government had no right to make decisions within its boundaries regarding gambling. Other states have said they may join New Hampshire in its lawsuit. Many expect those states that have significant online gambling, such as Nevada, New Jersey, and Pennsylvania, to sue.