Sports betting in Rhode Island has been delayed, and the decision costs the state millions in anticipated revenue. A number of betting enthusiasts are eager to get to Rhode Island facilities where betting on their favorite teams is a legal practice. Rhode Island is also located in an area of the country where people are avid sports fans, which means betting will likely generate lots of money for the state. The funds can be used to benefit Rhode Island in a number of ways, which is why the delay comes as a disappointment.

The budget for Rhode Island included $23.5 million in revenue from sports gambling through the end of June, assuming that the betting would start on October 1. Recently, analysts have predicted that this amount will be reduced by $12 million. The launch has been delayed until Thanksgiving time, according to the Providence Journal.

Rhode Island missed the opportunity to earn money from bets that would have taken place during the NFL season and the World Series. There has, however, been an additional $7.9 million in revenue that came from table games and slot machines.

Earlier this year, the U.S. Supreme Court denied the enforcement of a federal law that made sports betting illegal. Rhode Island is the only state in the New England region that has passed legislation for sports gambling. Betting on sports games will now be permitted at the Twin River casinos in the state, located in Tiverton and Lincoln.

Rhode Island lawmakers also confirmed that vendor negotiations with the company who will manage sports gambling in the state took longer than anticipated. Dominick Ruggerio, State Senate President, stated that he’s frustrated with the delay in implementing this new ruling. Ruggiero stated that “sports gaming provides the state with revenue that offsets reliance on taxes to support essential state services, such as education and fixing roads and bridges.” It is estimated that allowing state citizens to bet on sporting games Rhode will receive 51% of the revenue from sports gaming. The vendors receive 32% and the casino will earn 17%.

The Business of Sports Gambling in Rhode Island 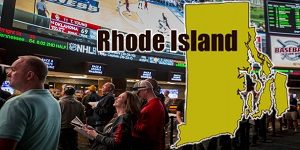 IGT, which is based in Providence, and William Hill, IGT’s commercial partner, has a five-year deal with Rhode Island.  William Hill and IGT are the only operators approved for sports betting in Rhode Island. IGT will handle the sports wagering platform and William Hill will take care of risk management. The software necessary for processing bets and setting betting odds was given to Rhode Island in early November 2018 for testing. Paul Grimaldi, Rhode Island Department of Revenue spokesman, confirmed this and asserted that sports betting would start once testing is complete. There’s also a single sports gambling window that is currently under construction in the state. The window is located at the site Twin Rivers used to utilize for dog and horse racing. The Boston Globe confirms that the betting window will open before the more permanent gambling facilities.

To date, neither Tiverton or Twin River has included information about sports betting on their websites. It is presumed that Tiverton built a sportsbook into the floor of the casino when the facility opened in September 2018.