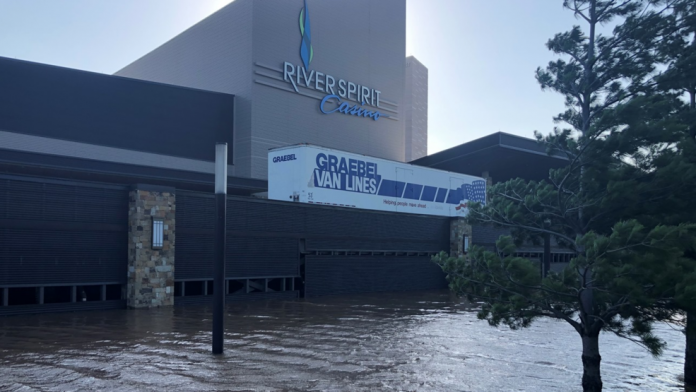 The Muscogee (Creek) Nation announced that their River Spirit Casino Resort in Oklahoma will remain closed until further notice, after water rising up from the Arkansas River has caused significant flooding to take place within the grounds of the facility.

The casino, which sits at 8300 Riverside Parkway in Tulsa, became completely engulfed in water; effecting the resort’s pool bar, tiki bar, and has also spread to the resort’s spa and wellness area since it first hit on May 22.

The water allegedly reached some 13 feet higher than the property’s own swimming pool deck too, as well as the main areas of the hotel. The two restaurants on the premises; Ruth’s Chris and Margaritaville managed to survive the flood and is reported to not be at risk.

The extent of the damages caused by the record-breaking flood are still being assessed, but the tribal operators have announced that they are hopeful the casino will be back open for business by no later than June 5.

“Like everyone in Tulsa, our decisions are dependent on the information we receive, and it continues to change day-to-day,” CEO Pat Croft said in a press release issued by Tulsa World on Monday.

“We need to learn the impact of the anticipated storms on Tuesday in Oklahoma and Central Kansas prior to sharing an estimated re-opening date,” he added.

The resort has a bi-weekly payroll of about $2.5 million and approximately 1,600 employees working throughout the premises; of which have been told they will receive full pay while the casino management attempt to have the place restored back to its normal condition.

“All facilities on the property remain structurally sound and, as designed, are withstanding the current level of release of 275,000 cubic feet per second from the Keystone Dam,” Crofts said. “We accounted for the possibility of a 100-year-flood and beyond.”

“Time and again we are having to address questions and rumors being perpetuated regarding the integrity of the resort. People tend to forget that beyond the layer of sandy soil is bedrock and we are anchored to it.”

Other Problems Could Arise

One of the main issues of concern is also the resort’s power supply.

“Really, the primary focus is accessing, and then drying out, the underground vaults containing the utilities for the property,” Crofts said. “Additionally, we have to clean and prepare any asphalt damage to the parking lots for the safety of our guests and employees.”

It’s not the first time the River Spirit Casino has experienced trouble such as this either – just 2 years ago in June 17, a bomb threat was made against the casino and ended up with the entire gaming floor and hotel being evacuated. Prior to that, another bomb threat was made back in early October 2011.

The Muscogee Nation also own another 8 casinos around the state, but the largest is the establishment in Tusla which opened back in 2017. It features 27-storeys with an all-glass hotel tower, 483 hotel rooms and suites, 200,000 sq. ft. of gaming space complete with 3,100 electronic gaming machines, and close to 31 table games with a 10-table poker room. The property also includes multiple restaurants and bars, as well as an entertainment venue which holds a 5,000 sq. ft. bar inside (the largest of all the Margaritaville resorts), and a 30,000 sq. ft. conference centre.