It is no secret that Canadians are not fans of U.S. President Donald Trump. Many governmental leaders in Canada have had nothing but negative things to say about Trump since he was elected in 2016. However, in recent weeks, the outrage and anger directed at Trump have caused people to consider whether to begin boycotting American products and services as a form of protest against his administration. This would include boycotting tourist destinations in the United States, which would include casinos and resorts all over the country.

Why Canadians are Angry

Canadians have been angry at Trump for a long time — at least since he was elected. But, most of them were willing to let the American president do his own thing. That is until he began implementing policy. Canadian Prime Minister Justin Trudeau began speaking out against Trump’s immigration policies when he first instituted the Muslim travel ban within the first week of his presidency. While the two leaders traded jabs at each other, they remained mostly civil until recently. Trudeau continued to speak out against what he saw as racism last summer and the continued attacks on immigration.

However, it was not until this spring that relations between the two got very heated. Trudeau began speaking out against the U.S. tariff restrictions on Canadian goods, as well as goods from other countries. He said these tariffs were counterproductive and hurt both economies rather than help them. The Canadian tariffs imposed by the United States were mostly for metal exports, such as aluminum and steel. The tariffs proposed were quite high: 25 percent on steel imports and 10 percent on aluminum. Canada has promised to begin tariffs on American-made goods as well, including agricultural products and manufacturing imports, such as automobiles.

The real outcry began when Trump called Trudeau weak and negated an agreement reached earlier in the month. His administration continued the attacks on Trudeau, which only added to the anger Canadians felt. A movement has been growing on social media to boycott all American products and to abstain from visiting the United States until Trump either apologizes or leaves office.

The Economic Impact of a Canadian Boycott 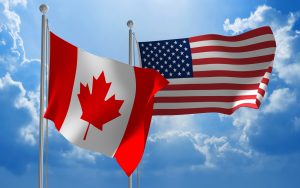 Many economists see this as no idle threat and are cautioning the United States to ratchet down its tone with regard to Trudeau and Canada, in general. The United States and Canada do more than $670 billion worth of business every year with each other, and that makes Canada one of the United States’ largest training partners. It is ranked number two in terms of trade.

In addition, 32 million Canadians visit the United States each year and spend close to a billion dollars while they are in the country. While the portion of this tourism is not broken down state by state in terms of gambling, what is known is that, in Las Vegas alone, more than 1 million Canadians visit every year and spend hundreds of millions of dollars on entertainment and gambling.

The loss of Canadian gaming revenue would be a huge blow to gaming interests in the United States. Many jobs in towns, as well as within the gaming and entertainment industries, rely on tourist dollars. When people stop visiting –for example, the city of Winnipeg, Manitoba, during the current casino strike — unemployment goes up and revenue goes down. No wonder many legislators are warning the Trump administration to turn down the rhetoric and insults thrown at Canada’s prime minister. Like it or not, Americans depend on Canadian imports, exports, and tourism for jobs and much-needed revenue for their local businesses to thrive.