News doing rounds indicates that police apprehended three people during a police raid in an illegal gambling establishment in Santa Ana. The raid took place on Wednesday, April 17. The unlawful gambling facility was set up to masquerade as a cybercafé offering betting and other gambling-related activities to their customers.

The arrests come a week barely after a similar gambling enterprise was shut down by the authorities. It is only last week that there was a police raid at the Lucky 999 Cyber Internet Café located at 1324 N. on Grand Avenue. During the raid, the police confiscated a total of 19 gaming machines and 21 people found in the facility detained by the police.

The latest arrest confirms fears of the law enforcers that people are setting up illegal gambling outfits that are not approved or regulated by the relevant statutory bodies. It is a worrying trend to the authorities that such gambling facilities are cropping up in Santa Ana, circumventing the law and due diligence required.

The gambling facility that was masquerading as a cybercafé was at the Fantasy Royal Gift shop at 413 W. 17TH Street. The raided store is at the very site of a previous marijuana dispensary store known as Sky High that was raided by police on multiple occasions in recent years.

The police served the Gift Shop with a warrant before the raid took place on Wednesday, April 17. The police sought the search warrant after numerous complaints from neighbours and locals who were worried about a surge in illegal activities within the area. The neighbours reported an increase in drugs and gang-related activities within the vicinity. 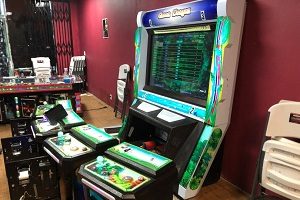 During the raid, the police seized five gaming machines that were in use at the facility. Three people were arrested at the site and were suspected to be involved in illegal gambling activities. Police also detained two more suspects to aid in investigations into unravelling the illicit activities taking place at the facility.

Santa Ana Police Cpl. Antony Bertagna said they had reasons to believe the illegal gambling joint operated around the clock. Bertagna also reported regular gambling activities at the location that could be associated with other illicit activities including auto thefts and fights.

After the raid, Code enforcement officials were involved to “red tag” the building. The tagging was done to mark the building unsafe for occupancy, as reported by Bertagna. The tagging will ensure that the facility is not used again for illegal gambling activities.

The police are determined to crash illegal gambling activities within Santa Ana. Gambling facilities that are not registered, licensed, and regulated by the authorities have on numerous occasions, reported to be dens of illegal activities.

The police resolve is to work hand in hand with the locals to report any suspicious, illegal gambling activities. The first-hand information from the locals will lead to crackdowns on illegally operated gambling facilities within Santa Ana.

The residents should expect more raids in the coming days, as the police are focused on eliminating illegal gambling activities in Santa Ana. The collaboration between the authorities and police will go a long way in curbing the menace of illegal gambling and related activities.