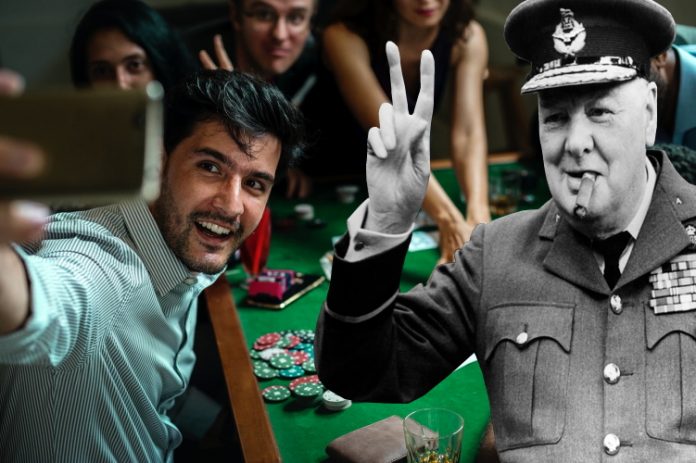 Churchill was one of the most admired and respected men in history, but the textbooks don’t ever talk too much about the unrepentant gambling habit he suffered with most of his life. The British Bulldog spent a lot of his free time playing card games, roulette, and baccarat inside many high-end London casinos throughout his career.

He would often lose buckets of money in a single visit, which helped him accumulate millions in debts over the years. Many who had the opportunity to play alongside him claim he was one of the worst gamblers ever, but that never stopped old Winnie from returning to the tables to continue his vigorous casino escapades.

Winston Churchill, son of Lord Randolph and Jennie Spencer Churchill, was born in Blenheim Palace, Oxfordshire, in the year 1874. His family was the immediate descendant of the Duke of Marlborough and among the most elite classes of British aristocrats. Due to his father’s work duties, Winston and his brother Jack spent most of their early childhood under the care and supervision of their nanny, albeit, she couldn’t stop the young boys from getting into trouble.

When he reached adolescence, his mother sent him to boarding schools in an attempt to straighten out his behavior. It was this point when she noticed he had already developed an appetite for money, spending more cash than the average family of 6 had to live on per week. At 17, and after two previous failed attempts to get in, Churchill enrolled at the Royal Military Academy. This was also around the time when his father passed away, which consequently fueled his already excessive spending habits further.

In the years that followed his father’s death, Winston served as a cavalry officer in Cuba, India, and Sudan, earning him an impressive pay packet of more than £100,000 a year in today’s currency. Even though this could have set him up for many years after completing his duties, the funds laid the foundations for his progressively expensive lifestyle.

By age 25, Churchill fought in the Boer wars in South Africa, then returned to enter the world of politics. During this time, he would drift between the left and right-wing parties before starting a new career as the Home Secretary, then later as the First Lord of Admiralty. In the lead up to these roles, he had spent years mingling with parliamentary members, drinking, smoking cigars, and partaking in games of chance such as horse racing and casino games. This behavior continued right up to the point he was appointed Prime Minister in the year 1940 — and beyond.

An Underlying Taste for Hedonism 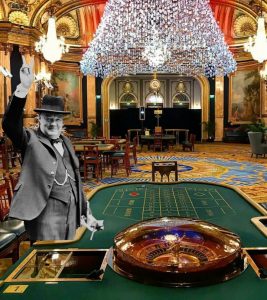 For more than 40 years, Churchill continued to rise up in the political ranks. But as his stature increased, so did his gambling debts and addiction to alcohol, which caused him to fall into a deep depression — what he referred to as “the black dog.” Despite ongoing personal battles, the Prime Minister still managed to keep his own and the rest of the country’s spirits up when real battles, such as the Blitz and the invasion of Normandy, took place.

Possibly his most infamously documented gambling experience occurred in August 1939. Churchill was on vacation in one of his favorite cities in the world, Monaco, and spending time at the Hotel de Paris in Monte Carlo. On one particular evening, he was said to have been drinking heavily and racked up the largest debt in his entire life. Despite his best efforts, and after playing through to the early hours of the morning, he couldn’t recoup any losses. Before the hotel director could even ask him to pay up, he was rushed back to the UK due to fears of another war outbreak. 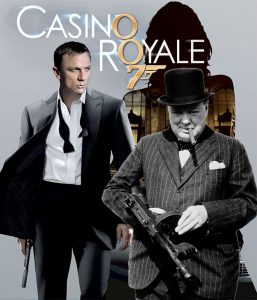 Towards the end of the Second World War, Anthony Eden was elected as the new Prime Minister. This new move left Churchill with a lot of spare time and a massive amount of dividends from his successful biography and published war diaries. As a result, he was able to pay off all of his debts and regain a sense of normality when it came to his home and personal life.

Soon after settling his finances, the British Bulldog was back at Monte Carlo when he was invited to attend the hotel’s wine cellar reopening. Without a second thought, Churchill attended the ceremony, where once again, he overindulged in alcohol and gambled at the casino tables. Here, he embarks on yet another losing streak, at which point the casino became compelled to ask him to stop playing.

He responded to their request by writing a check for 1.3 million francs to cover his debts from before and after the war. Out of good faith and gratitude for his outstanding role in the war, however, the check was never cashed in.

The Mourning of a Great Man

When the news of Churchill’s death came in 1965, the Monte Carlo casino renamed the apartment where he always stayed to “the Churchill.” He was given a state funeral across six days on January 30, where he was laid to rest at Westminster Hall before being taken to Waterloo Station by boat. From there, his remains were transported to the family plot at St Martin’s Church in Bladon, close to his birthplace at Blenheim Palace.

Since his passing, Winston Churchill memorials and museums have been erected around the world in his honor. Almost 80 years later, he is still remarked as one of the greatest political leaders and war heroes in British and global history. His novel, memoirs, and biographies continue to inspire millions and still capture the attention and recollection of the press, even today.

Churchill always had the firm belief that he was — as directly quoted — “a man of destiny.” Though he may have lacked any kind of restraint when it came to gambling and his affinity with alcohol, he was entirely dedicated to the British people and making the world a better place.