In the months after Vegas casinos reopened after coronavirus lockdown, police have been dealing with increased cases of violence and gun-related crimes.

The Las Vegas police has released statistics that violent crime on the Las Vegas Strip is up 4% over last year, including brawls, stabbings and gun violence in and around casinos, resulting in 1,472 arrests.

The police have implemented an operation called Persistent Pressure to deal with the surge in violence. The operation has increased police presence in tourist areas of Las Vegas, including Downtown Vegas and the Strip.

In addition, local casinos have beefed up security as well. Wynn and Encore casinos on the Strip have new security measures in place in response to the crime wave.

Wynn Resorts now scans all patrons for metal objects upon entry and screens hand-held bags. Wynn and Encore have increased security officers and added K-9 teams as well. The security checks are heavier between Fridays through Sundays. 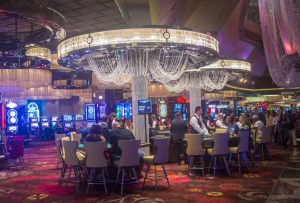 The Cosmopolitan is the latest casino to add heightened security to the mix. Police are stationed at the entrances for screening purposes, and the casino will only allow entry to patrons with restaurant or hotel reservations, and rewards members.

A fight broke out inside the Encore in early September, resulting in $15,000 in damages. Wynn Resorts owns the Wynn Las Vegas and the Encore, and the company has added K-9 units and additional guards at both properties. They have also raised room rates.

In a statement to the press, Las Vegas sheriff Joe Lombardo addressed the violent crime wave. When asked the reasons for the increase in crime, the sheriff told USA Today:

“If you look across the U.S., a lot of major city police chiefs are experiencing the same type of crime picture. I think the pandemic is directly related to it. Bad behavior, anxiety, unemployment, the inability to blow off steam is causing a lot of this to occur,” Sheriff Lombardo said. “Our nightclubs are closed; all our live entertainment is closed. There’s not a lot of release occurring not just in our jurisdiction but in Los Angeles and Phoenix and San Diego, where a majority of our visitors come from. They’re in lockdown more than we are.”

Sheriff Lombardo also blamed increased gang presence in Vegas as well as drugs and alcohol as crime catalysts. He said a good portion of the violence came from out-of-state gangs visiting Vegas.

The sheriff also explained that the cities where most Vegas visitors hail from, including Los Angeles, San Diego, and Phoenix, their lockdowns were stricter. The pent-up pressure of the pandemic plus alcohol, drugs, and gangs all adds up to an explosive mix.