The Justice Department recently made a decision to release a legal viewpoint that could implement even more restrictions on online gambling. The decision is getting significant criticism from attorney generals in various states, as well as former department officials. These professionals have several questions about casino magnate Sheldon Adelson’s long-standing push for the move.

The opinion from the Justice Department, which was posted online during the partial shutdown of the government, reversed an interpretation by the department in 2011 of the Wire Act, which effectively gave US states permission to legalize lotteries and other types of internet gambling.

Adelson has been pushing for this change for quite some time. He is a major donor for the Republican Party who spent over $20 million to support Donald Trump’s 2016 presidential campaign.

More on the Justice Department’s Decision 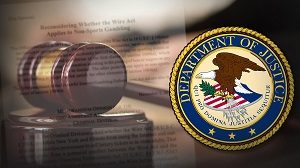 The department’s opinion was released on January 14 by the Office of Legal Counsel (OLC). The opinion echoed the points outlined in a memo that Charles Cooper wrote. Cooper is an attorney at a law firm in Washington. At the time of the letter, Cooper was working as part of an Adelson-backed lobbying team. Cooper’s memo went to OLC back in 2017, according to officials. Cooper is also a former head of the OLC and has worked for former attorney general Jeff Sessions as a personal lawyer.

During an interview, Cooper did confirm that he lobbied officials in the Justice Department to reconsider its previous viewpoint concerning the Wire Act. Cooper also said that he expressed his satisfaction that the memo was resonating with his successor.

Cooper states that the opinion “accords entirely with the analysis my firm undertook and I shared with the DOJ.” Cooper also compared the memo he wrote to the opinion pieces and law review articles that were research materials for the lawyers who work for the Justice Department.

Officials for the Justice Department stated that the process that led to the new viewpoint was not related to other opinions. The department also stated that its new decision was in keeping with the guidelines and norms of the Department of Justice.

Feedback from the Department of Justice

Nicole Navas Oxman, a Justice Department Spokeswoman, states that “the 23-page opinion reflects the Office of Legal Counsel’s best judgement of the law, and the accusation that the opinion was by any outside interest is baseless and offensive.”

The opinion is, however, centered on a Wire Act interpretation, a statute created in 1961 that makes it a crime to transmit information or promote foreign or interstate betting. In September 2011, the Obama Justice Department issued an opinion that indicated that only sports betting fell within the purview of the act.

Reversing this decision could have a significant impact on interstate lotteries that has made many state officials upset. These officials have come to depend on revenue from the lottery to fund important programs in the state.

In their recent letter, the state attorneys general argued that the new opinion “tramples over the law and states’ rights…to upend the settled expectation on which we have been relying on nearly a decade.”

Gambling companies were also ranked. These companies see online betting as a growth market and one of the best ways to compete with the land-based casinos that are part of Adelson’s empire.